After a few weeks of uncertainty, Berlin has approved the delivery of military equipment to Saudi Arabia, Kuwait, and Egypt. Opposition politicians have accused the ruling coalition of putting profit before human rights. 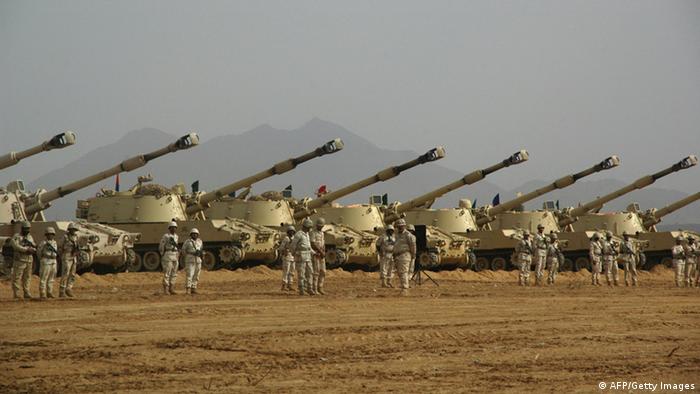 Germany's Federal Security Council approved the export of shooting simulation systems, target display devices and border security technology to Saudi Arabia on Wednesday, putting an end to weeks of confusion over whether the federal government was putting a freeze on all arms exports to the Kingdom.

While the Council stressed that no heavy weapons would be sent to the Saudis, they did authorize the delivery of 12 tanks to Kuwait. Also included among the deals green-lighted on Wednesday was a consignment of 240 two-way radios to Egypt.

Sharp critique for the federal government

The opposition Greens and Left parties were extremely critical of the ruling coalition allowing German firms to do business with nations holding dubious human rights records.

Van Aken demanded that all weapons exports to Saudi Arabia should be "stopped completely" and Greens party spokesperson for security policy Agnieszka Brugger decried the government for "providing…weapons and other military equipment to third-party countries where human rights are systematically violated."

"This includes Egypt as well as Saudi Arabia," Brugger added, "where 183 death sentences were handed down only two days ago."

Both Van Aken and Brugger referenced the case of blogger Raif Badawi being sentenced to 1,000 lashes and 10 years in prison for "insulting Islam," which Foreign Minister Frank-Walter Steinmeier also called a "cruel" punishment.

Amnesty International called for a protest outside the Saudi embassy in Berlin on Thursday to call attention to Raif's case.

Saudi blogger and activist Raif Badawi started criticizing his country's regime more than six years ago. Since then, his family has been threatened and fled to Canada and his lawyer has been arrested. (30.01.2015)

Germany has decided to cease exporting weapons to Saudi Arabia because of ongoing conflicts in the Middle East. But Germany's weapons industry stands recoup some losses with a consignment of submarines to Australia. (25.01.2015)