Religious and political leaders have paid tribute to Pope Benedict XVI after the German-born pontiff announced he would resign. Angela Merkel called him "one of the most significant religious thinkers of our time." 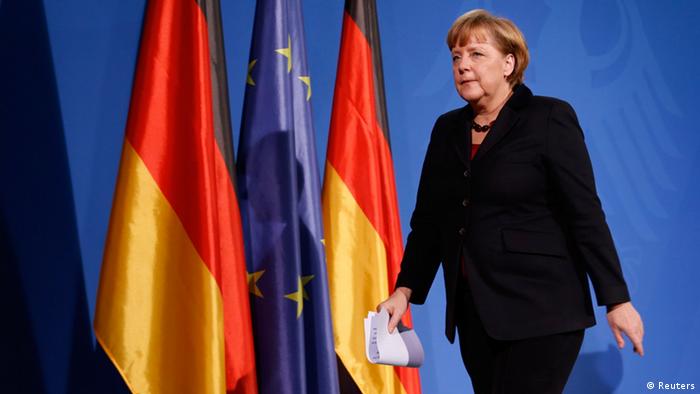 German Chancellor Angela Merkel said on Monday that Pope Benedict XVI had her "utmost respect" for his decision to resign his post at the head of the Roman Catholic Church.

"The pope's words will accompany me for a long time to come," Merkel said, praising Benedict as "deeply educated, with a sense for history's great correlations and a lively interest in the processes of European unification."

Merkel also alluded to the pope's efforts in bringing the world's different faiths closer, saying he always knew that such a process would only work through interdenominational and interfaith dialogue.

"And he led that dialogue," Merkel, herself the daughter of a Protestant pastor, said.
The state premier of Benedict's Bavarian birthplace, Horst Seehofer, said the pope's decision deserved "the greatest respect even though I personally deeply regret it."

Benedict addressed the German Bundestag in September 2011, where he said he felt the fundamental task of a politician was "to serve what is right and to defend against injustice." Merkel said this speech was one of the finest hours in the history of the parliament.

President Joachim Gauck, who served as a Protestant pastor in communist East Germany, met the pope on a recent visit to Rome. Gauck said that the pope's "faith, wisdom and personable modesty" left him "deeply impressed," while also praising the decision to be the first pontiff since the 15th century to step down.

"A great amount and courage and introspection was required for this historically extremely rare decision; both these characteristics command my most revered respect," Gauck said. "Benedict XVI served the entire world as pope, but in his heart he always stayed closely bound to his home."

Papal resignations: Rare but not unheard of

Although most popes remain in office until their death, the regulations that govern the Catholic Church allow for a pope to step down from his duties. He need not ask permission: It is his decision entirely. (11.02.2013)

If one considers the German-speaking but Utrecht-born Hadrian VI to be "German," Benedict was the first German pope since 1523. His election in 2005 prompted the famous headline "We are pope!" in the mass-circulation Bild daily.

Spiritual leader to more than 1 billion

French President Francois Hollande said that Benedict's decision was "eminently respectable," but said he had no specific comment on a church matter. "This is a human decision and one tied to a desire that must be respected."

A spokesman for Israel's Chief Rabbi Yona Metzger told the AFP news agency said ties between Judaism and Catholicism "became much closer" during Benedict's time as pope, bringing about "a decrease in anti-Semitism around the world."

The World Jewish Congress in New York also praised Benedict's interfaith efforts, saying that "no pope before him made more strides to improve the relationship with the Jews."

US President Barack Obama said he and his wife offered their prayers to the retiring pontiff.

"Michelle and I warmly remember our meeting with the Holy Father in 2009, and I have appreciated our work together over these last four years," Obama wrote in a statement issued on Monday in Washington.