Germany's right-wing populists said they sought to celebrate the contributions of white men, who faced "rampant discrimination" in society. The calendar was promoted with the hashtag "yes to white men" on Twitter. 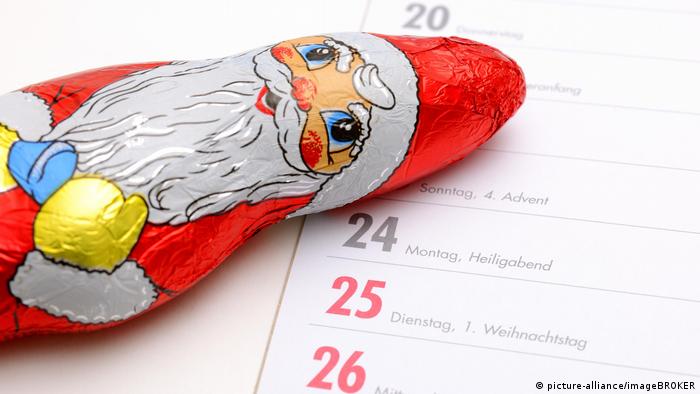 The AfD of the Berlin parliament drew criticism for a new Christmas campaign honoring notable white men every day in the month of December, in the tradition of the Advent calendar. The far-right populists announced their controversial move with a message on Twitter, using the hashtag "yes to white men" (#JaZuWeißenMännern).

"At the most beautiful time of the year, every day we introduce you to a person who has significantly influenced our Western civilization. 'White men' have become an insult to some in recent years. Not to us."

The calendar features famous German men such as playwright and poet Berthold Brecht and Martin Luther, a key figure in the Protestant reformation.  But it also featured international figures such as US President Ronald Reagan and the late Pope John Paul II.

In the short YouTube video, a member of the AfD at the Berlin House of Representatives wishes the viewer a "white Christmas" and introduces the white man of the day, adding a short sentence describing his contribution.

Read more: What kind of party is the AfD growing up to be?

Georg Pazderski, head of the AfD in Berlin's parliament, explained that the initiative was a reaction to discrimination targeting white men, which has been a result of "a gender campaign that has long gone off the rails."

Pasderski claimed that white men now face disadvantages in finding jobs and face public stigma, as a result of "rampant discrimination from the Greens and the Left."

All of the 22 AfD parliamentarians in Berlin's city-state legislature are white, two are female.

The move met stern criticism. Many people on Twitter used the AfD's own hashtag to promote infamous white men like disgraced Hollywood producer Harvey Weinstein, Nazi figures and the Ku Klux Klan, among others even including Harry Potter villain Voldemort.

"Harvey Weinstein, without him, the #metoo movement would never have taken off!" read a tweet from a parody account, posing as the AfD calendar.

Some anti-hate organizations began promoting snowmen as the white man of the day.

Others on Twitter pointed to the irony that on day 7, the featured white man was the late Apple grandee Steve Jobs, whose biological father was a Syrian immigrant to the US. The AfD has become increasingly focused on an anti-immigration message and negative reaction to the refugees, many of them Syrian, who arrived in Germany in 2015.

The AfD responded to the criticism over Steve Jobs, saying they were certain he would be discriminated in present-day California for being a white man.

But the organization also turned the accusation of racism on its critics. The right-wing populists argued that with the calendar, the goal was to "start the conversation in Germany about the disparagement of white men" and that if their opponents were resorting to "racial stereotypes" to criticize the inclusion of Steve Jobs in the calendar, then their job was done.

German prosecutors have opened a formal probe into AfD leader Alice Weidel over alleged election campaign donations from Switzerland. It is illegal for German parties to receive contributions from non-EU countries. (20.11.2018)

German reporters have learned to avoid being baited by the far-right populism of the AfD, a new OBS study says. Instead, the media is pursuing new investigations into the AfD. (20.11.2018)

Germany's last regional election of 2022 promises to be a mini-poll on Olaf Scholz's first year as chancellor. The SPD is hoping to break up with the conservatives who want to depose the SPD state premier.