Almost three months after he was first booted out of the party for extremist and neo-Nazi links, Brandenburg's head of the far-right AfD party has resigned. Andreas Kalbitz said he was still awaiting legal clarification. 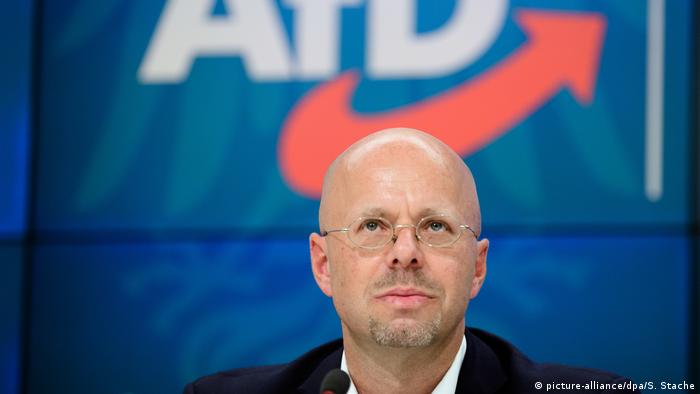 The former state parliament leader of the far-right Alternative for Germany (AfD) party announced Tuesday he would step down from the role of regional leader of the state of Brandenburg.

His announcement came after he was ousted from the national party almost three months ago for allegedly associating with neo-Nazis and harboring extremist views.

Kalbitz said he would await legal clarification on his position from a Berlin regional court, implying that his resignation may not be permanent. He made the announcement after a four-hour meeting of the Brandenburg AfD parliamentary group, which accepted his resignation unanimously.

'No place in the party'

"I am being blamed here for an explosion and subsequent damage done by shrapnel from an explosive device that I did not plant," Kalbitz said as he resigned, criticizing the federal executive board that had removed him from the party.

He said he believed that he would he be proved right in the end and this would raise the question:  "How credible are those who keep saying that they are acting according to the rule of law?"

The AfD's national co-leader, Jörg Meuthen, welcomed the decision, having previously said that Kalbnitz had "no place in the party."

Alongside the state of Thuringia's party leader Björn Höcke, Kalbitz was seen as being on the right flank of the anti-immigration party.

The national party leadership initially ousted Kalbitz on May 15 for not disclosing that he was allegedly a member of the now-banned Heimattreue Deutsche Jugend (HDJ) organization. The HDJ — which approximately translates to German Youth Faithful to the Homeland — was a right-wing extremist group with links to neo-Nazis and was reminiscent of the Hitler Youth.

Kalbitz denied such membership but said it was "not unlikely" that his name was on an old HDJ list.

However, a Berlin court then ruled that he had to be reinstated as a member because the expulsion went against German laws that require termination of membership to be decided by special party tribunals. An AfD arbitration panel upheld his expulsion at the end of July.

Kalbitz's decision to step down apparently marks the end of a period which was characterized by Jörg Müller, state head of Germany's intelligence agency, as the state branch "de facto being led by a right-wing extremist with no party affiliation." Brandenburg lies in the east of Germany and surrounds the capital of Berlin.