The explosion destroyed the toilet, demolished the stall and shattered windows. Police do not know where the boy got the explosives and say he's lucky to have escaped without seriously injuring himself or others. 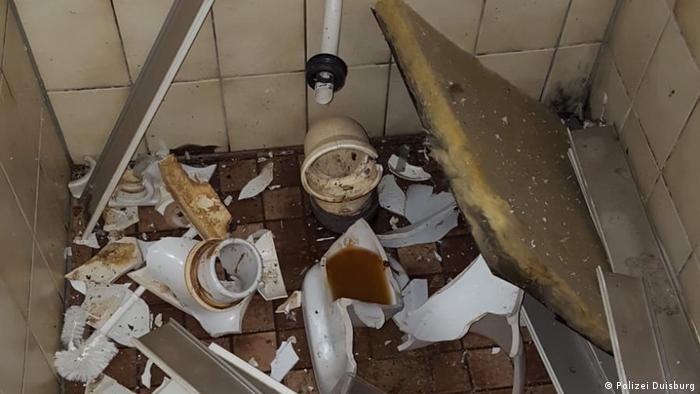 A 10-year-old student in the western German city of Duisburg caused serious damage at his elementary school on Friday morning when he used an extremely powerful firecracker to blow up a toilet.

The result of what may have been a child's prank ended with massive property damage and the risk of serious injury. Police say the boy placed an illegal Polish firecracker next to the toilet, lit the fuse and then ran out of the boy's bathroom.

The explosion utterly destroyed the toilet as well as blasting tiles and tile fragments off the walls, collapsing the ceiling and shattering windows — sending shards of glass flying more than 15 meters (50 feet) into the schoolyard.

Lucky no one was seriously injured

Duisburg police say they do not yet know where the boy acquired the explosive but say he is very lucky that neither he nor anyone else was seriously injured in the incident.

Police say the case illustrates the serious danger presented by such illegal explosives, which are much more powerful than those legally attainable in Germany. The purchase and possession of such firecrackers is illegal in Germany and punishable with fines and up to three years in jail under the country's explosives law.

Separately, state prosecutors in Cologne also announced that raids had taken place across the country on Friday, in which customs authorities arrested a number of people for the illegal import of explosives similar to those used in Duisburg.

Authorities searched 54 apartments and numerous fireworks warehouses and confiscated 74 packages of Polish firecrackers en route to customers via parcel services. Prosecutors said customers had no idea how "absolutely life-threatening" the contents of those packages were.

Starting the New Year with a deadly bang

The Duisburg police posted a clear warning on their homepage Friday about the threat posed by the Polish explosives and urged parents to speak to their children about them before the coming New Year. Fatalities and serious injuries are a regular part of German New Year celebrations, as fireworks are permitted for private use around the country.