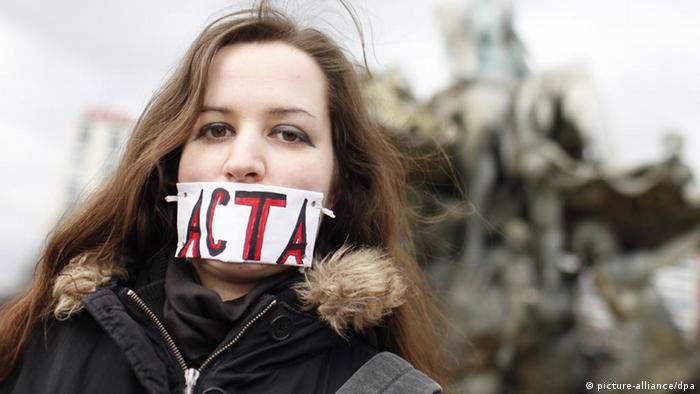 Anti-ACTA Protesters marched in dozens of cities across Germany over the weekend, with the biggest demonstration of around 2,000 people taking place in Munich.

Rallies in Hamburg, Frankfurt, Stuttgart, Mannheim and Leipzig attracted more than a 1,000 people each, while numerous smaller demonstrations took place across the country.

ACTA, as the Anti-Counterfeiting Trade Agreement is known, aims to fight the counterfeiting of goods like fake Gucci sunglasses and copied pharmaceutical drugs. It is also designed to reduce online piracy such as the illegal downloads of music, films and software, which the industry says is costing millions in lost revenue around the world.

Critics argue the measures to combat counterfeiting outlined in ACTA could force telecommunication companies to watch over and pass on customers' online movements to the government - which, in turn, could stifle free expression on the Internet.

Many of those against ACTA are in their teens and early 20s, which is hardly surprising considering that the anti-ACTA demonstrations are mainly about the Internet. 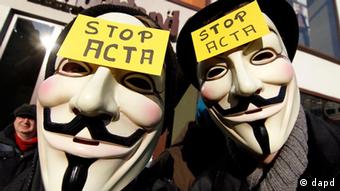 One of those protesting on Saturday was Filip (who, like all of those at the rally, preferred not to reveal his last name). A clean-cut computer science student enrolled at the prestigious Karlsruhe University of Technology, Filip had never attended a protest before in his life.

"The Internet is important enough for me to come out in the cold weather and stand around and support everyone who is here to not pass the act," he said at the protest in the south-western town of Karlsruhe, which was attended by several hundred people.

"I don't want my Internet provider to be watching every more I make," he said, his voice almost drowned out by those around him cheering and clapping in support of the protest speakers.

Fourteen-year-old high school student Michael came to the rally to defend his right to download music.

"I can't afford the music I want to listen to and music should be available to everyone," he said, adding it was unjust for Germany to consider banning people from using the Internet who were repeatedly caught illegally downloading content like music and videos.

"Society today only takes place online, and if you don't have Internet access, then you can't be part of society anymore," he said.

The Federation of German Industries (BDI) has voiced support for ACTA. "It is not a right to use someone else's property for free," said BDI legal expert, Heiko Willems. "Copyright-holders have to decide for themselves if they will make their creations freely available or available on a commercial basis."

For 23-year-old student Shushu, the issue of illegal music and film downloads needs to be tackled in a different way. 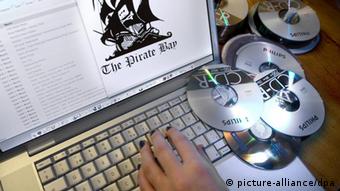 "The content industry needs to make us an offer of how we can legally do this, by accepting a cultural flat-rate fee or setting a monthly streaming fee without having to turn people into criminals," she said.

Several countries such as the United States, Canada, Japan and South Korea have already ratified ACTA. And up until a few months ago, ACTA seemed like a done deal in Europe as well.

In December last year, the European Council representing the European heads of government unanimously agreed to pass ACTA and the agreement was signed by 22 of the 27 European member states. ACTA can't be passed into European law, however, until every one of the European Union's member states agrees to it.

The problem for ACTA is that several European countries, including Germany, Poland the Netherlands, have postponed signing the agreement after a wave of Europe-wide protests over the past month.

In addition, the European Commission last week said it would refer ACTA to Europe's highest court, the European Court of Justice, to determine whether it limited the "EU's fundamental rights and freedoms."

Back at the Karlsruhe rally, the crowd marched through the streets chanting, "ACTA, ad acta," a play on a Latin expression used in German to archive something.

"We will keep protesting until ACTA has not just been postponed but shelved for good," one of the protesters said.

A study proposing a two-strikes model against Internet piracy in Germany is being welcomed by the Ministry of Economics. The study arrives as others in Europe hesitate to ratify the controversial ACTA treaty. (23.02.2012)

The European Commission said Wednesday it would present the controversial ACTA treaty on copyright and counterfeiting law to the European Court of Justice, to rule whether it violates the fundamental rights of Europeans. (22.02.2012)

Legal battles could soon emerge as digital sharing moves beyond copying media to taking files and transforming them into physical objects. (26.01.2012)