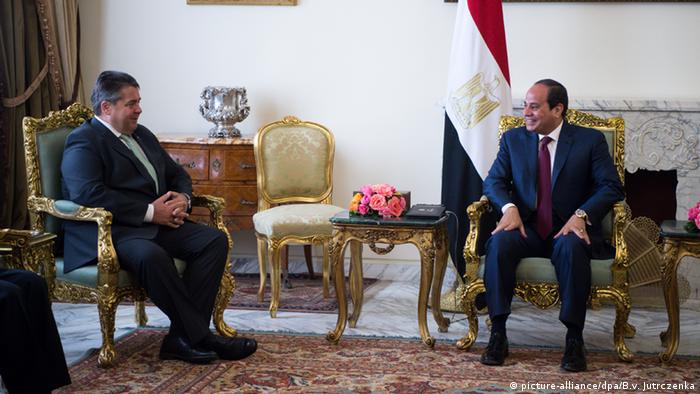 "We have a huge interest in keeping the country stable," Gabriel said, adding that stability in Egypt was key to the management of the migration crisis in Europe as well as to minimizing the risk of "Islamic State" (IS) attacks in Europe.

Gabriel also suggested that Germany could mediate between Egypt and its international creditors. The country has been struggling with its finances; President al-Sissi's decision to cede two Egyptian islands to Saudi Arabia recently sparked public protests. It was announced during a recent visit by visit by the Saudi monarch, who pledged billions of dollars of loans and investment to Egypt. Critics saw this as as a desperate and humiliating territorial sell-off.

"We announced our willingness to cooperate," Gabriel said after the long meeting, before adding that Germany did not make any concrete financial promises to Egypt.

The Arabic-language al-Ahram newspaper reported on its English website that Gabriel was heading a delegation of more than 120 investors during the visit. Gabriel's visit is expected to culminate in the signing of a number of economic agreements and memoranda of understanding.

Recently, German tech giant Siemens signed a contact with Egypt to build the biggest gas and steam turbine power plant in the world.

Gabriel did, however, also highlight the poor human rights situation in the country. Al-Sissi has been widely accused of committing a range of human rights abuses, which he addressed voluntarily during the meeting with Gabriel.