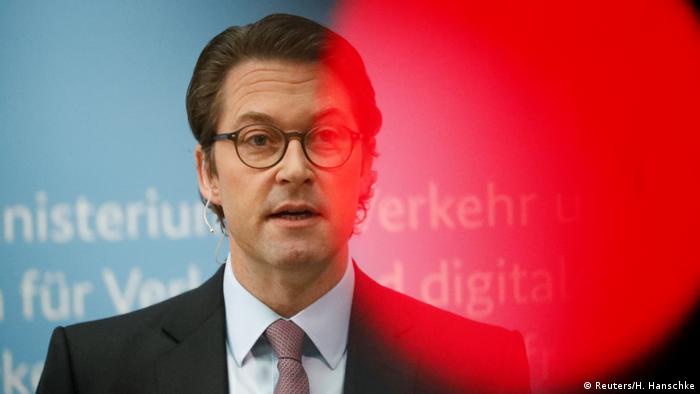 German Transport Minister Andreas Scheuer is facing renewed calls to resign after two companies said they were suing the government for €560 million ($620 million) over his failed plans to introduce a road toll in Germany that would disproportionately impact foreign-registered cars.

"It is no longer justifiable why Andreas Scheuer continues to be transport minister," the Green party's parliamentary leader Anton Hofreiter told the Rheinische Post newspaper. "The fact that the chancellor hasn't long since sacked a minister with such an abysmal record shows the weakness of the coalition."

Oliver Luksic, MP for the Free Democratic Party (FDP), described the companies' lawsuit as a "knock-out blow" for Scheuer. "With his actions, the minister has not only made an investigative committee necessary, but as even caused even bigger damage than previously thought."

Scheuer's protracted attempt to introduce a road toll came to an ignominious halt in June, when the European Court of Justice ruled that his plans contravened EU anti-discrimination law, because they included a tax cut for cars registered in Germany. 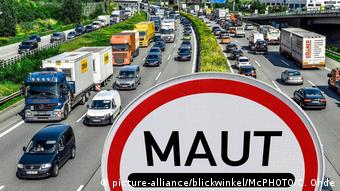 Following the ruling, Scheuer canceled contracts he had made with the companies Kapsch and CTS Eventim in 2018, leaving the government open to massive compensation claims.

In a statement to the stock market, the companies argued that they are entitled to 12 years' worth of lost profits for the toll operator Autoticket, a firm they founded together to take over the contract, as well as costs they had incurred so far and compensation claims from subcontractors they themselves had hired.

In July, Scheuer admitted to a parliamentary committee that the contracts with Kapsch and CTS Eventim had been canceled because of the ECJ ruling, though in a video statement released on Thursday he argued that the companies had not "met their contractual commitments."

"We reject with all firmness the operators' demands," Scheuer said. "The numbers are wrong and have no basis whatsoever."

The dispute could be tied up in courts for years. But damning for the minister was a document quoted in Die Welt newspaper on Friday, which showed that the ministry's own lawyers had warned Scheuer in January that the operators could sue the government for lost profits for the full 12 years of their contracts.

The debacle has set off an avalanche of criticism from opposition parties, who blasted Scheuer for signing massive government contracts before his toll plans had legal clarity.

Scheuer also drew outrage last week from parliament after he recategorized documents related to the autobahn toll affair as secret.

According to a report in Der Spiegel from last Monday, parliamentary workers had to watch while Transport Ministry officials "who seemed a little embarrassed" came into their offices and wheeled boxes of documents away in handcarts. The 52 files had recently been demanded as evidence and were due to be discussed in public hearings last week.

The Federal Audit Office has also accused the Transport Ministry of violating rules on how government contracts are granted.

The left-wing movement Aufstehen ("Stand Up"), along with former Left party leader Sahra Wagenknecht, has collected 22,000 signatures for a petition demanding that parliament pass a law making the misappropriation of public money a crime, specifically citing Scheuer.

"In any normal business Scheuer would long since have been sacked and would be in court," the petition's statement read.

But Scheuer still has the backing of those in power. In a recent Q&A session in the Bundestag, Chancellor Angela Merkel insisted that Scheuer was "doing a good job," a phrase echoed later by Ralph Brinkhaus, the conservative Christian Democrats' parliamentary leader.

Meanwhile, Markus Söder, Bavarian state premier and leader of Scheuer's party, the Christian Social Union (CSU), criticized the controversy on the grounds that the parliamentary committee had yet to actually come a conclusion.

The other half of the government coalition, the center-left Social Democrats, has been more circumspect, criticizing Scheuer but not demanding his resignation.

German ministers have overwhelmingly voted against a Greens proposal to impose speed limits on the country's highways. Backers said the measure would improve traffic, safety and pollution. Critics said it made no sense. (17.10.2019)

Germany's environment agency has called for the government to bring in a raft of measures to limit carbon emissions from road traffic. Among the proposals are speed restrictions on Germany's autobahns. (05.12.2019)

Greta Thunberg and Fridays for Future notwithstanding, more than 1 million new SUVs and off-road vehicles hit Germany's streets this year. Have the Germans lost their senses? Paul-Christian Britz considers the evidence. (15.12.2019)