German tourist killed by shark attack in Egypt | Germany| News and in-depth reporting from Berlin and beyond | DW | 06.12.2010

A German woman holidaying in the popular Egyptian resort of Sharm el-Sheikh died after being attacked by a shark. Beaches along Egypt’s Red Sea coast closed on Sunday while search teams looked for sharks. 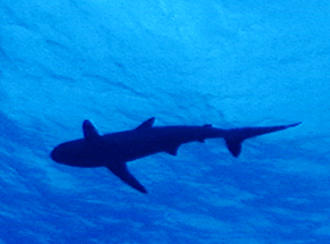 A Mako and a Whitetip shark were captured on Thursday

A 70-year-old woman died on Sunday after being attacked by a shark while swimming near the shore in the Red Sea.

Medical officials said the tourist was pulled out of the water dead after the shark mauled her thigh and arm.

The death in the popular resort of Sharm el-Sheikh comes after four people were injured in similar attacks at the resort earlier in the week.

Following the first attacks the government closed beaches from Wednesday until Saturday. On Thursday, authorities said they captured two sharks believed to be behind the attacks.

The Environment Ministry has once again ordered beaches in Sharm el-Sheikh and the surrounding area to close for 72 hours while search teams scour the water for sharks.

The number of recent shark attacks is unusual for the Sinai Peninsula, which is a popular scuba diving destination.

"We are getting marine biologists from abroad to assess the situation and why there was this change in biological nature," said Garana.

Manager of the Sinai Diver's Centre, Rolf Schmid said the whole area had not had sharks "for the past 10 to 15 years."

A new set of geographic inventories catalogs marine species by region, providing a window into biodiversity in the world’s oceans and seas – and the largely man-made threats to rich marine ecosystems. (03.08.2010)

A tiny shark has German biologists scratching their heads. She's producing offspring, despite having no male partner. Scientists have solved some parts of this reproduction puzzle, but questions still remain. (01.03.2010)