German top court may seek readjustment to ESM | Europe | News and current affairs from around the continent | DW | 11.09.2012

It would surprise even the plaintiffs if Germany’s constitutional court toppled the European Stability Mechanism (ESM) with its ruling - legal experts consider it unlikely. But the court could demand readjustments. 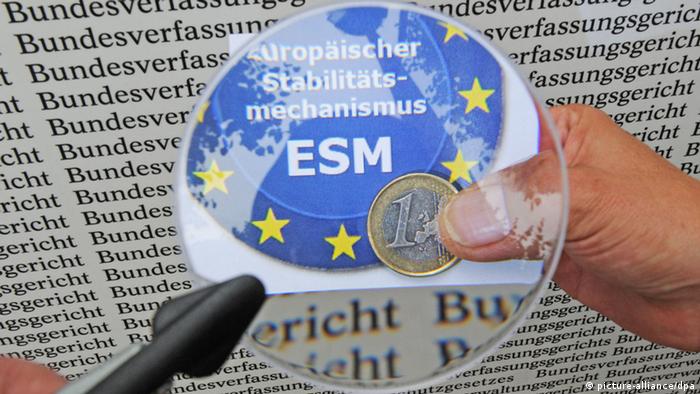 Would it be right if German President Joachim Gauck signed the treaties on the ESM and the fiscal compact? Or do they infringe on the German constitution? Christoph Degenhart, an expert in constitutional law from Nürnberg, believes the latter is true.

And he's not the only one. Together with former Justice Minister Herta Däubler-Gmelin from the opposition party SPD, Degenhart has filed a constitutional complaint against both euro rescue mechanisms. According to him, the mechanisms risk whittling away the democratic principles at work in Europe and Germany.

All in all, 37,000 citizens have filed constitutional complaints against the ESM and the fiscal compact. Of those, 25,000 have done so by supporting the complaints filed by Degenhart and the former justice minister. 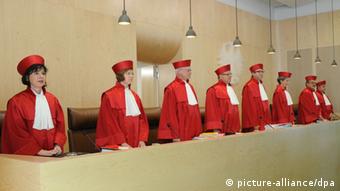 The world is watching Karlsruhe this week

The plaintiffs also criticize that there is no cancellation clause and no limitation of liability in the rescue mechanisms. If the ESM goes through, the Governors' Board - the eurozone finance ministers - could in theory top up the capital stock whenever deemed necessary.

That would mean the German Parliament would lose its budgetary sovereignty. In addition, the authors of the complaint claim that the ESM stands in stark contrast to the no-bail-out clause written down in the European treaties which stipulates that no state can be liable for other countries' debts.

But Ingolf Pernice, an expert on European and constitutional law and the founder of the Walter-Hallstein-Institute for European Constitutional Law in Berlin, opposes this view. According to him, there is no democratic deficit when it comes to the ESM and the fiscal compact. Special committees in the European Parliament or in national parliaments could be included in the decision-making process, he suggests.

"But we're not dealing with lawmaking or budgetary planning processes - we're dealing with matters that require governance. It's about emergency measures to guarantee the existence and the stability of our currency," says Pernice, adding that there is no infringement of the German Parliament's budgetary rights because the Federal Republic would have to give its approval whenever there are plans to increase the volume of the ESM. "That means that Germany could veto any such plan." 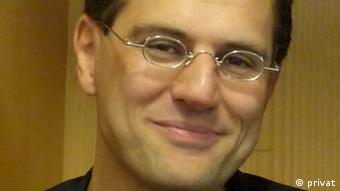 Franz Mayer is an expert on European law at Bielefeld University

Other experts on European law agree. Franz Mayer also says there is no infringement of budgetary authority. He has represented the German Parliament in lawsuits concerning the preliminary rescue fund EFSF, where national parliaments' rights of participation were a big issue. Both the ESM and the fiscal compact do take national parliaments' rights into account, Mayer stresses.

But this is not usually the case in international treaties, says Mayer. "We have guaranteed everything that's possible and necessary under democratic principles." Mayer also doesn't see an infringement of the no-bail-out clause, because the European treaties allow for "voluntary aid." "You are allowed to help, but you don't have to."

He points out that a lot of what is reported about the procedure is not true. "Anyone can verify for themselves in the fifth paragraph of Article Eight that Germany's liability is under all circumstances limited to what is currently agreed. What else do you need to hear, apart from ‘under all circumstances?'" 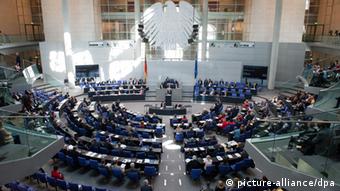 The case will determine what rights the Bundestag has

It goes without saying that plaintiff Christoph Degenhart is hoping for a different ruling. "If the Constitutional Court continues on the path it's been taking, the judges would have to say: ‘This is as far as we'll go.'"

But Degenhart remains skeptical. "It would be very courageous indeed if the court were to topple the ESM and the treaties in their entirety," he admits. But he is expecting the court to make clear statements on what's acceptable and what isn't.

European law expert Ingolf Pernice also doesn't believe that the judges in Karlsruhe will topple the ESM and the fiscal compact. Not just because of the consequences such a decision would entail - something he expects them to take into consideration when passing their judgment - but above all because there is no basis for such a step, Pernice says: "I believe it's entirely in compliance with the constitution."

Germany's finance minister, Wolfgang Schäuble (CDU), has repeatedly warned of the consequences a negative decision by Karlsruhe would entail. Christoph Degenhart says he can't see the dangers. "Let's assume that the ESM is toppled. What would happen? The same as what we've seen ever since oral proceedings started: nothing." Neither have markets crumbled, says Degenhart, nor has Europe sunken into chaos, nor has the economy faced grave disadvantages: "The only thing that's happened is that some people have started to become skeptical."

In Focus: The world looks to Karlsruhe

As the German Constitutional Court in Karlsruhe decides on whether the European Stability Mechanism (ESM) is legal, DW examines the issues, the arguments and the role of the court. (11.09.2012)

Getting by without the ESM

What might happen if Germany's Constitutional Court blocks the ESM, the planned permanent rescue fund for the eurozone? Is there a plan B? Ahead of the ruling expected Wednesday, speculation is growing. (11.09.2012)

Germany's Constitutional Court is preparing to issue what is likely to be one of the most significant rulings of its history. How is this key body within German government structured, and what is its scope? (11.09.2012)

What happens if German courts stop the ESM?