For the first time in Germany, top intelligence officials will publically answer questions in front of a parliamentary committee. The hearing is part of a government push to take the agencies "out of the grey zone." 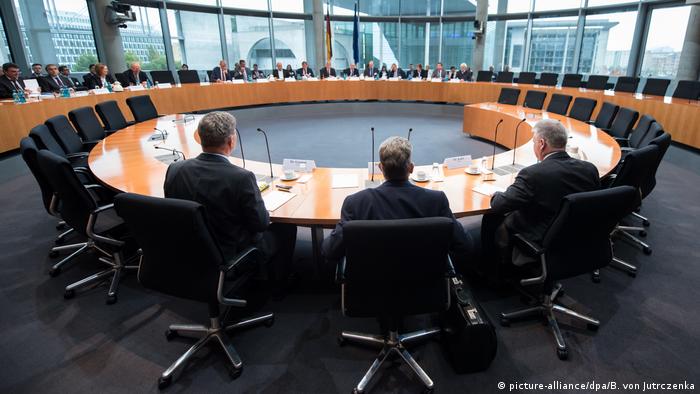 The heads of Germany's secret services – the foreign affairs body, the German Intelligence Agency (BND), its domestic equivalent the Office for the Protection of the Constitution (BfV), and the Military Counterintelligence Service (MAD) – all convened for a public hearing before the German parliament's oversight committee for the first time on Thursday.

In his opening statement, BvF head Hans-Georg Maassen said that "the biggest threat" when it comes to German security is Islamic terrorism. At the same time, there is a growing danger of violent right-wing and left-wing extremists, and as well as cyber espionage.

"There is a boom in all our fields of interest," he said

At the same time, he said that the relationship between privacy and safety shoud not be viewed in a "static and especially not dogmatic" light. According to Maassen, secret services need "a full toolbox, which allows them to solve present-day problems," instead of being dependent on the tools provided by their foreign allies.

Maassen's comments were echoed by BND chief Bruno Kahl, who said that secret services must adapt to the ever-changing issue of digitalisation.

"We, as intelligence services, need to make sure that we keep up with these developments," he said.

While the agencies regularly report to the nine-member body, such proceedings are usually secret. Last October, however, the government launched a bid to reform the secret services, which introduced the concept of annual public hearings.

The lawmakers are expected to quiz the intelligence heads about terrorism, cyber security, and the reform efforts for at least three hours. According to observers, some of the inquiries should also touch on the sore spots in the intelligence community, including the botched effort to stop the murderous neo-Nazi cell NSU and the spying scandal involving the US National Security Agency (NSA).

However, the head of the oversight committee, Clemens Binninger of Chancellor Angela Merkel's Christian Democrats, warns that the hearing is neither a trial nor a cross-examination.

"This is not, and can never be, a light version of a parliamentary investigation," he said, adding that it should be viewed as an attempt to take the secret services "out of the grey zone."

In the public context, the committee members will "only ask those questions […] that they already know the answers to," he said.

German intelligence services are much less present in the public eye than their counterparts in the US and Russia.

The BND performs roughly the same role as the American CIA, gathering intelligence outside Germany's borders. With some 6,500 employees, it is the largest of the three German agencies.  Following the end of the Cold War, the agency is increasingly focusing on halting the drug trade, money laundering, the illegal weapons trade and terrorism. BND chief Bruno Kahl once served as an aide to the current Finance Minister Wolfgang Schäuble.

The BfV however, deals with threats inside Germany, including spies, jihadists and political extremists. It employs around 2,750 people, headed by Interior Ministry veteran Hans-Georg Maassen.

With only some 1,200 employees, the MAD is the smallest of the three agencies. Its mission is to act against espionage and sabotage in the German army, as well as to control extremist attitudes and actions among the soldiers. The chief of the military intelligence service is a civilian, constitutional lawyer Christof Gramm.