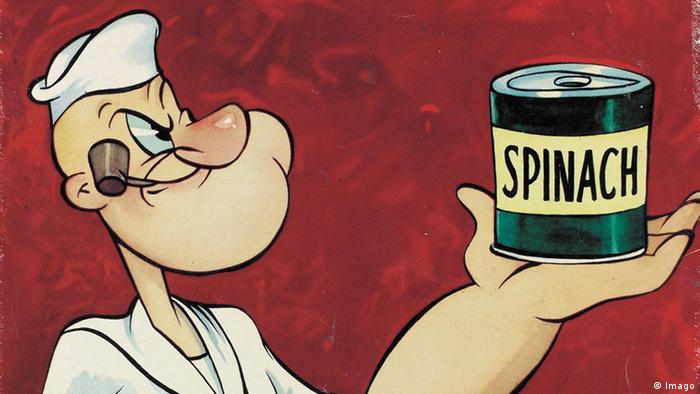 Scientists at the Freie Universität Berlin have recommended that ecdysterone, a steroid-like chemical found in spinach, be added to the list of banned doping substances, German media reported Tuesday.

The university's Institute of Pharmacy led a 10-week strength training program with 46 athletes to test how the substance affected their physical performance.

Some of the participants were given placebos, others were given ecdysterone capsules containing the equivalent of up to 4 kilograms (or 8.8 pounds) of raw spinach a day.

During the study, which was supported by the World Anti-Doping Authority (WADA), those taking the supplement saw their physical strength increase three times as much as their placebo-taking counterparts.

The fictional cartoon character Popeye the Sailor is known for attributing his bulging biceps to spinach, gulping down a can whenever he needed extra strength.

The Berlin study is the first in Germany to prove the link between spinach's ecdysterone and significantly improved physical performance, although previous research in other countries has drawn similar conclusions.

"Our hypothesis was that we would see an increase in performance, but we didn't expect it to be that big," Maria Parr at the Berlin university's Institute of Pharmacy said in an interview with broadcasters ARD and ARTE.

The results meant ecdysterone belonged on the list of banned substances for sports, the researcher added.

"We recommended to WADA in our report that the substance be added to the doping list. We think that if it increases performance, then that unfair advantage should be eliminated."

The decision would be left up to an expert body at the agency, but that will only likely happen after further investigation into how many athletes use the supplement.

Nuremberg-based anti-doping expert Fritz Sörgel told Deutschlandfunk radio that he expected there to be more studies into the properties of other plant-based extracts to follow.

"In the past we weren't able to pin down these kinds of substances with the same level of accuracy," he said. "Today we have analytical methods that allow us to extract substances from plants, which also could have a potential impact. So [this study] is really only the beginning."

Germany's anti-doping law has come into force. This means that German athletes who test positive for performance-enhancing substances could face a prison sentence from this day forward. (18.12.2015)

A joint Austrian and German probe into a blood-doping ring linked to a German doctor has widened to 21 athletes from eight countries across five sports. Some of the suspects do not yet know they've been identified. (20.03.2019)