Humans were exposed to the toxic fumes in experiments requested by a group funded by German carmakers, according to media reports. The shocking revelation came after tests on monkeys became public over the weekend. 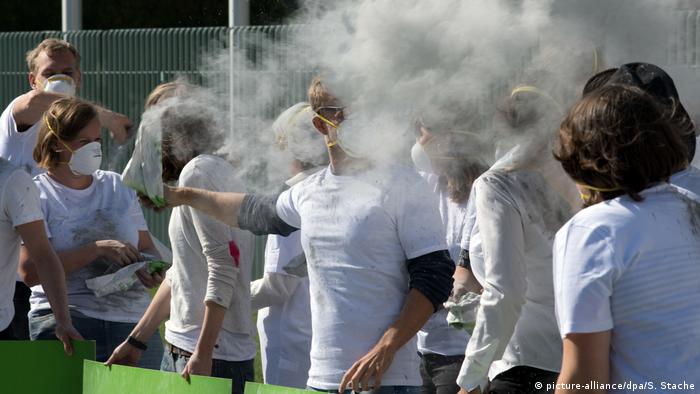 Reports by German newspapers Stuttgarter Zeitung and Süddeutsche Zeitung said humans had been exposed to a gas found in diesel fumes during an experiment "sometime between 2012 and 2015" requested by a group funded by German carmakers.

The tests were requested by the European Research Group on Environment and Health in the Transport Sector (EUGT) — a now defunct organization founded by German carmakers Volkswagen, Daimler and BMW.

The experiments focused on "short-term nitrogen dioxide inhalation by healthy people," according to the newspapers. An Aachen-based university hospital then examined 25 people after they inhaled varying amounts of the gas over several hours.

The experiments were reported on after recent revelations of an experiment where — in equally controversial tests — monkeys were made to inhale the toxic gas.

Not to be tolerated

Reacting to the accusations, Volkswagen said in a statement "we are convinced that the scientific methods chosen at the time were wrong."

Daimler said Sunday it was "shocked by the extent of those studies and the way there were carried out."

"We strongly condemn the tests," the company said, adding that it had had no say in the testing method and the measures taken by the EUGT were "against Daimler's values and ethical principles."

The Stuttgart-based carmaker said it had launched an investigation into the tests on monkeys and humans which it considered "superfluous and repulsive."

German Environment Minister Barbara Hendricks said later on Monday she was "horrified" by the news.

"What is known so far is disgusting," she said, adding that the auto industry and the scientific community must explain their role. "The fact that an entire industry has apparently tried to conceal brazen and dubious methods of scientific research makes it even more monstrous."

Aachen University Hospital said in a statement that the aim of the study was to examine whether exposure to NO2 at various concentrations below the previous limit would result in biological effects in healthy volunteers.

"The study thus served to optimize job security, for example for truck drivers, vehicle mechanics and welders," the statement read. "Extremely sensitive, non-invasive techniques were used to capture the biological response, in line with the best available methodology and based on years of development work."