Nearly two years after a hostile Chinese takeover, Kuka's Chief Executive Till Reuter is to be replaced. The industrial robot maker recently revised down its 2018 revenue prediction and its share price has plummeted. 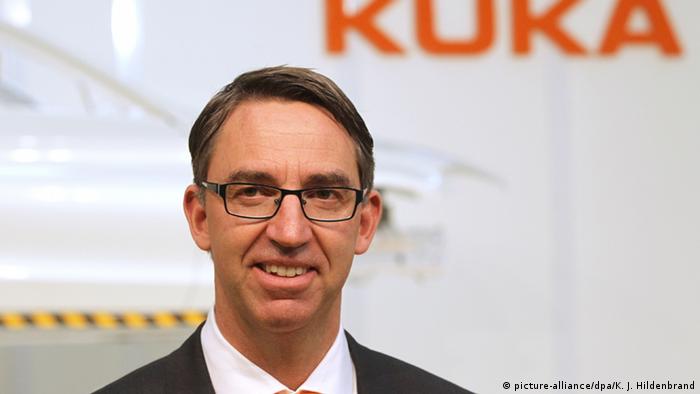 German industrial robot maker Kuka on Saturday said it was planning to replace its CEO Till Reuter.

At the time of the acquisition, Midea gave assurances about keeping Kuka's German operations intact and made guarantees to maintain existing staff levels until 2023.

Sources in the company told the German news agency Deutsche Presse-Agentur (DPA) on condition of anonymity that Midea is now trying to speed up the integration of Kuka into its larger business operations and increase its control over the management.

Over the past year, however, the company's share price has lost almost 60 percent of its value, falling from €188 ($213) at the end of October 2017 to just €68.60. It recently revised down its revenue forecast for 2018 from €3.5 billion euros to €3.3 billion and promised an efficiency drive amid tightening economic conditions.

The acquisition of one of the most technologically-advanced makers of industrial robots by a Chinese firm caused much controversy, in part due to national security concerns.

Both Berlin and Brussels have warned about letting cutting-edge technologies fall into Chinese hands as the world's second-largest economy ramps up its ambition to be a significant high-end manufacturer over the next decade.

Located in the southern German city of Augsburg, about 40 kilometers (25 miles) northwest of Munich, Kuka employs a total of 13,710 people.

The German government has said it wants to be able to intervene earlier if a non-EU investor acquires 15 percent of a German company. Berlin has been wary of Chinese and US investors moving to take over key tech firms. (07.08.2018)

The world's largest electric utility aims to acquire a stake in 50Hertz — a joint venture which owns a huge chunk of the German electricity grid. The plan is likely to stir controversy over China's influence. (09.02.2018)

Germany runs like clockwork — that was long the widely accepted cliche. Then came the coronavirus, and everything started crumbling. Zoran Arbutina says the wake-up call was long overdue.