Special promotion days such as Black Friday and Cyber Monday have slowly but surely changed Germany's retail landscape. More and more consumers are hoping to secure deals, but that doesn't mean everyone is happy. 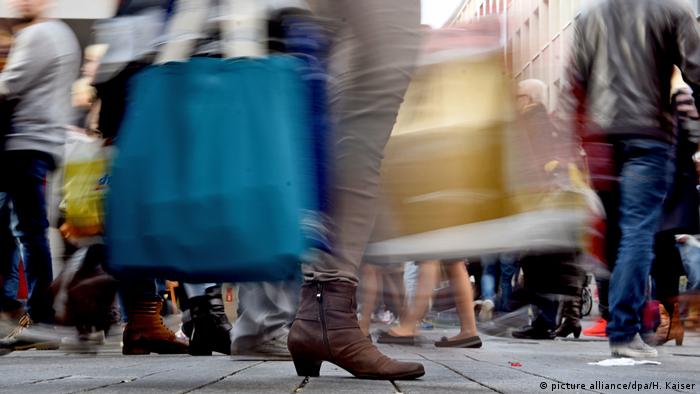 It's been a hectic few days for the people behind the online platform blackfridaysale.de in the run-up to this year's largest pre-Christmas shopping bonanza in Germany.

Thousands of discounted products are on sale again this year, and brisk business has almost been taken for granted ever since Black Friday made its way across the Atlantic six years ago.

"Black Friday has a fairly short history in Germany compared to the roughly 50 years it's been a traditional shopping event in the US," blackfridaysale.de spokesman Albert Haschke told DW.

Read more: Black Friday is not coming to Germany, it's already here

Interest among German consumers in Black Friday has risen steadily in recent years, as the exploding number of Google searches for the term bears out. Close to 90 percent of Germans know what Black Friday stands for, compared to 98 percent in the UK.

So, there's still some catching up to do, says Haschke, "but we're getting there." Some market analysts are surprised that such special sales days are a hit in a saturated market environment like Germany's, but Haschke says the huge discounts on offer are not to be sneezed at.

"It's true, that we have a saturated market in many retail segments, but when people realize that they can save a lot in the purchase of Christmas gifts they would have bought anyway, it's an incentive for many to take part in Black Friday shopping."

Hardly anyone doubts this year's shopping frenzy will become a success again. The German Retail Association (HDE) expects revenues to the tune of €2.4 billion ($2.74 billion), also with the help of Cyber Monday. If the figure is confirmed, it would mark a solid improvement on the 1.7 billion of generated revenue during Black Friday in 2017.

Read more: German retail sales climb most in a year

Images of German consumers elbowing their way through huge crowds in brick-and-mortar stores will be fairly rare, though, as an overwhelming majority of Black Friday enthusiasts prefer hunting for to so-called "best deals" online.

German electronics specialist Ceconomy (which owns the Media Markt and Saturn retail chains) and fashion group Zalando are among the most prominent participants in the Black Friday frenzy in Germany.

They're offering a wide range of promotions that lots of consumers will again be willing to secure. Not all of the discounted goods on offer represent genuine bargains, but that's an open secret.

What's more alarming is that Black Friday, and Cyber Monday for that matter, has the potential to ruin some retailers' Christmas season business, rather than boosting it.

"It doesn't make much economic sense to lure consumers with huge discounts so early in the season," argues retail expert Gerrit Heinemann from the Hochschule Niederrhein University of Applied Sciences, adding that such large-scale promotions would be better coming at the end of the Christmas season.

However, Kai Hudetz from the IFH Cologne consultancy on retail issues points out that retailers have no choice. "Who doesn't take part [in Black Friday] may find themselves unable to sell their stuff later on."

But one shouldn't blame the consumers, says marketing expert Martin Fassnacht from the Otto Beisheim School of Management. "Discounts are just such a strong drug," he said in a statement.

What brick-and-mortar and online stores do for the day is mark down many products that would otherwise have sold at higher prices. But knowing what's going to happen, consumers wait for Black Friday and get what they want to get, making it next to impossible for retailers to return to full prices in the weeks leading up to Christmas and the New Year.

German consumer electronics chain Ceconomy could tell you a thing or two about it. Last year's Black Friday turned out to be the day with the highest revenues in the company's history.

But its pre-Christmas sales at discount prices had weighed down on business in December, with new items piling up in the stores. At the end of the day, Ceconomy logged worse revenues and profits for its entire Christmas season activities than a year earlier.

Black Friday is not coming to Germany, it's already here

Searching for bargains on Black Friday and Cyber Monday is quickly spreading across the globe as retailers are using what was once a truly American tradition for their advantage. (23.11.2017)