German restaurants reopen with pandemic measures in place | Germany | News and in-depth reporting from Berlin and beyond | DW | 21.05.2020 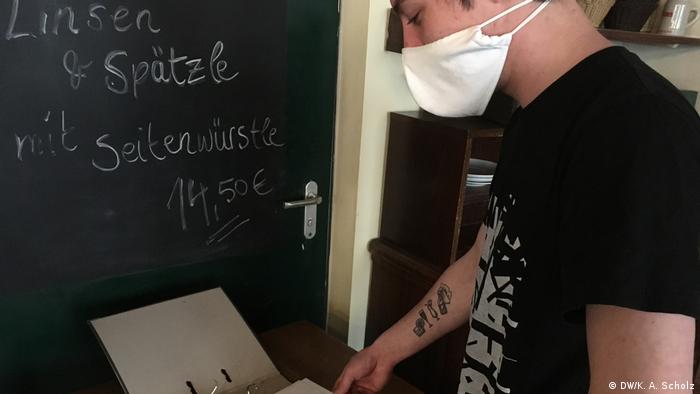 Restaurants in Berlin, as in most of the rest of Germany, are now allowed to receive guests between 6 a.m. and 10 p.m. But, in the normally lively district of Mitte, many restaurants are staying closed all the same. Others have opened, but, with the tourists and theatergoers who would usually make up much of their clientele absent, no one is in them but bored waiters.

As a result, many restaurants have not bothered to resume operations, said Johannes, who runs an eatery that serves cuisine from southern Germany.

In the first days since the end of lock-ins to slow the spread of the novel coronavirus, business has been disappointingly slow: Johannes said the restaurant was selling 30 meals a day instead of 180. "There are no people coming from the offices nearby, " he said. "The windows are dark, and staff are working from home."

Johannes said he hoped for good weather so that his guests could sit outside. Inside is "tricky": Customers must wear masks en route to their tables, which are devoid of vases, pepper shakers and serviettes. The new regulations rule out a cozy, convivial atmosphere, he said.

A few meters away, Maren runs a restaurant that specializes in traditional German dishes interpreted with a modern touch. She said she missed hovering over the guests, topping up their wine glasses and bringing them the dessert menu. "This isn't what restaurant service is meant to be like," she said. Behind her, a waiter was disinfecting the new washable menus.

Read more: Germans should get used to paying more for meat

The Berlin Senate, which governs Germany's city-state capital, announced the exact regulations for reopening only recently. Maren is still in the process of making the required adjustments to her restaurant, including installing a large Plexiglas screen. It doesn't look pretty, she said, but she expressed optimism that it would allow her to make more space for tables. She lamented the lack of a hotline for restaurateurs to call to clear up uncertainties about the regulations. 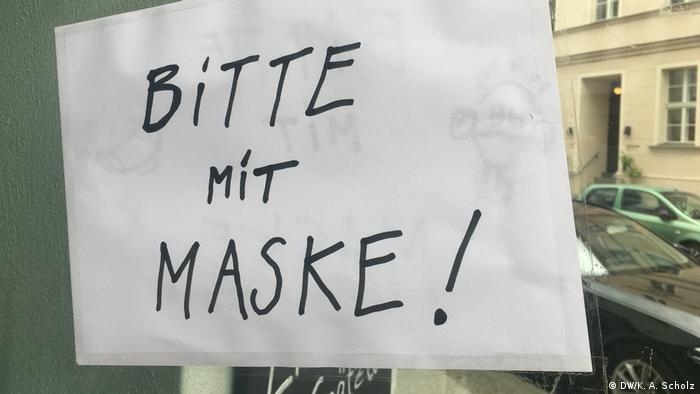 Both restaurant owners are concerned about how they will restore the profitability of their businesses. "After two months of making nothing but debts, things have to start running again," Maren said. She added that it's like starting over. She's going to have to learn how many people will come and when, as well as how many chefs and waiters to schedule and what she needs to buy. She said she could need employees just to make sure that people keep their distance from one another and follow other new regulations. But she acknowledges that it could prove problematic if one of her employees were to try to stop guests from hugging each other.

Johannes said all the purchases necessary for reopening — disinfectant dispensers, masks for the staff, paper sachets for the cutlery and the pepper — came out of pocket.

Only a few guests had come for lunch that day, including three people who were speaking Spanish. The waiter on duty was worried because he was going to have to explain a complicated new regulation: Tables may now only be shared by members of two separate households. He said he hoped that the guests didn't speak only Spanish, because asking them how many addresses their group had would be much more complicated than describing the menu, which he could do using "hands and feet."

The guests wrote down their contact details, a voluntary measure in Berlin to allow for tracking infections, and signed a paper saying their group conformed to the law, freeing Johannes from liability should the police check. He isn't allowed to confirm whether the information given by the guests is correct: Only officials responsible for public order are permitted to do that. After four weeks, Johannes must destroy the documents, which, he said, doesn't just mean more work, but more rubbish, too, along with the single-use bags, masks and disinfectant bottles. "Obeying the rules is a very expensive business," he said.

Johannes is trying to procure a subsidy of up to €25,000 ($27,500) now being offered by Berlin's government. He said other German states had given support to restaurateurs much earlier. To get the money, he is also meant to estimate what his turnover in November will be, a prediction that he finds hard to make. Even if lots of tourists from abroad were to come to his restaurant as they used to, there would be uncertainties, he said, recounting how he has heard guests say they didn't want to sit at a table next to Italians because the pandemic has proved more deadly in Italy than it has in Germany so far.

Read more: WHO director to address conference on coronavirus pandemic

Many of the guests who came in the first few days seemed not to realize how worried their hosts were; they were too pleased to be able to have a cocktail served to them in the evening sun again at last. Lots of the regulars wanted to drop by just for a coffee on Sunday afternoon but were still sitting there at 8 p.m. Many of them knew each other, but they were not allowed to push tables together so they could chat more easily.

But it is perceptible that the pandemic and its constant companion, fear, often sit along with the guests. Should anyone nearby at a nearby table turn out to be infected with COVID-19, the case, health authorities could require everyone to quarantine for 14 days. And that would put a temporary end to any restaurant visits.

Restaurants, shops and museums are now allowed to reopen in Italy, under certain conditions. For many business owners, the new rules remain too difficult to operate under. (18.05.2020)

Restaurants and cafes across Austria have finally reopened their doors, and the mood among owners, staff and customers is a mixture of relief, pleasure and apprehension. Their main concern is: Will it last? (18.05.2020)

The belated convening of the legislature in 2020 is meant to publicly celebrate China's getting through the coronavirus pandemic. The government will have to answer some inconvenient questions, DW's Frank Sieren writes. (20.05.2020)