German Rent-a-Protestor Business on the Rise | News and current affairs from Germany and around the world | DW | 09.01.2007

German Rent-a-Protestor Business on the Rise

You have a cause but you lack supporters? You want to stage a demonstration but have no friends? There's no reason to sulk anonymously anymore. These days in Germany, protesters are available for hire. 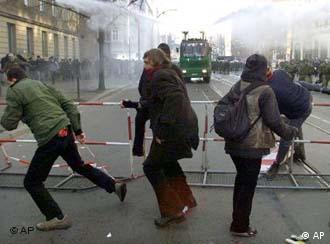 Drumming up support for demonstrations is not always easy

From opponents to nuclear energy and sworn enemies to elevator music to dog lovers championing the right of their pets to poop wherever they want, Germans are loud and proud when it comes to making their voices heard.

Social protests are always a combination of activism, conceptual art and street carnival. Unlike late-night political talk shows on German television, which the overworked portion of the German population sometimes consumes in lieu of a friendly serving of sedatives before hitting the sack -- street protests are a fun way of combining one's love for fresh air with a sense of much-needed purpose in life.

It is, nonetheless, not always easy to drum up support for one's cause. Cold weather, bad hangovers, relationship break-ups and favorite soap opera reruns often stand in the way of a healthy rally turnout.

So what's an ambitious demonstration organizer -- faced with the embarrassing prospect of showing up alone at his or her protest -- to do? 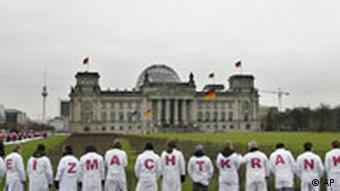 German online rental market erento.com has now opened a section for protestors that are available for hire.

For many people, it is rather unpleasant to admit that they're looking to rent demonstrators, but, according to Bonow, there is no reason for shame.

"There is no way to tell real protestors apart from the fake ones," Bonow said.

There are currently around 300 protestors available for hire on the company Web site. Individual fees range from 100 to 145 euros per day ($130-190). Protest organizers decide themselves who they want to hire and the internet platform charges a 4.9 percent commission on successful matches. 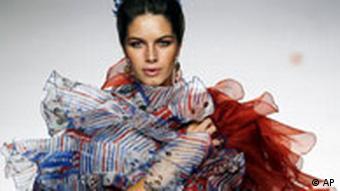 Not your average protestor

Hiring protestors may not be cheap, but it's the only way fashion-conscious organizers can make sure their demonstration gets noticed for the fact that even beautiful people are fighting for their cause. And if ambitious but stylish protest czars choose the correct body type, hair color and appropriate outfits for their protestors, they can even have their just cause end up on the covers of a glossy fashion magazine.

But what about those poor, indecisive souls who don't even have a cause but who know, in the depths of their inner being, that their lives would be infinitely more fulfilling if they could only organize their own rally?

The next logical step for online marketers would be to start offering causes for rent. You could go to a website -- rentyourowncause.com or adoptacause.com, for example -- choose something that fits your needs and your temperament ("protest against Queen Elizabeth II being allowed to celebrate her birthday whenever she wants" or "protest against the repulsive color of purple cabbage") and then create your very own, personalized, dream team of protestors.

With a high enough limit on your credit card, you could take the world by storm.

Germany is certainly facing serious problems, but it's also important not to forget to laugh once in a while. Read up on a selection on recent articles about funny events in Germany. (08.12.2006)

What with their notoriously long working hours, no wonder the nation's doctors are tired. But many feel that hiring students to protest the controversial health care reforms on their behalf won't help their case.... (19.12.2006)

In addition to their lawmaking duties, German politicians may soon have to start working as fashion consultants. Apparently, Germany could solve its economic problems if the unemployed would only get a sense of style. (15.12.2006)