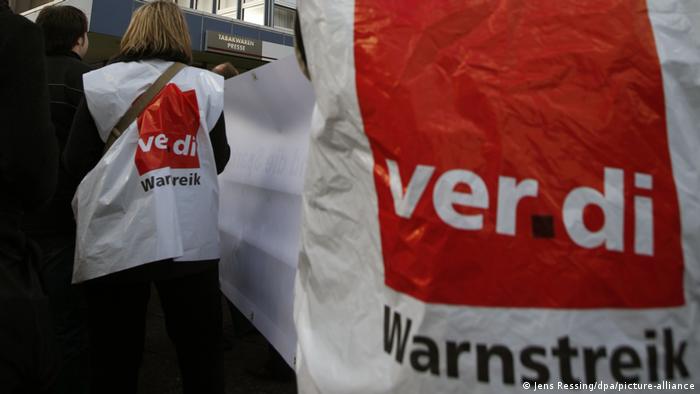 One of Germany's biggest trade unions, Verdi, on Sunday announced that warning strikes would take place on Tuesday, saying employers in the public services sector had "walled themselves in" during wage negotiations.

Verdi chief Frank Werneke said the strikes were "unavoidable" after employers failed to make an acceptable offer in the latest round of pay bargaining. He said the two sides were still far apart on core issues and that employers were obviously not aware of how serious the situation was.

The strikes could affect hospitals, banks and other public institutions such as nurseries.

Bringing the east into line

Verdi and German Civil Service Federation (DBB), which both represent public service workers, are calling for 4.8% higher wages, with a minimum monthly raise of €150 ($178).

The unions are also calling for working hours in Germany's eastern states, which were part of former communist East Germany from 1949 to 1990, to be shortened by an hour in line with those in the west.

But Ulrich Mädge, who is negotiating for the public service employers' association VKA, stressed how difficult the financial situation of many municipalities was during the coronavirus crisis.

"We provide secure jobs, protection against unlawful dismissal; that is surely worth a lot at this time," he said, adding that municipalities were interested in guaranteeing wage rises in the medium term as their financial situation allowed.

More rounds of talks are scheduled for October 22 and 23.