Prisoners in a small German city are being served cheeseburgers in place of their usual fare after a food contract deal fell through. They can order items up to a value of 4 euros. 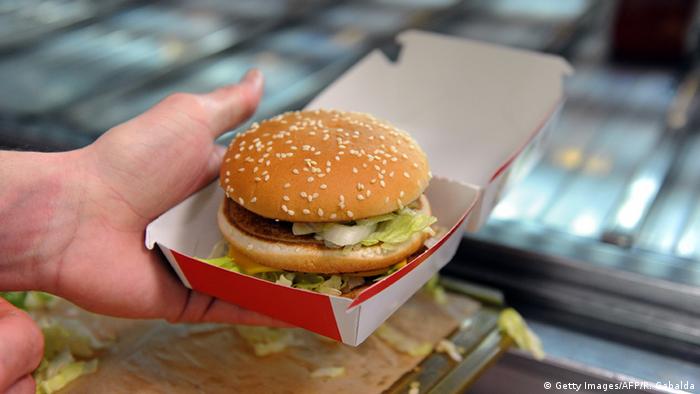 Police in the western German town of Bergisch Gladbach have been ordering takeaway McDonalds for inmates after a food supply contract fell through at the start of March, local media reported on Monday.

The inmates of the short term facility are given the choice of a hamburger, a cheeseburger or a veggieburger for lunch and a McToast with cheese, ham and bacon for breakfast, Cologne tabloid "Express" reported. Bigger burgers were reportedly too expensive.

The inmates mark off their choices and officers pick up their orders from a McDonalds branch 160 meters away, it reported.

The catering business cancelled the prison contract shortly after its main client in the town, the local hospital, ended its business dealings with the firm. So a quick replacement needed to be found.

"The location and the round-the-clock availability made us decide in favor of McDonalds," police spokesman Richard Barz told local paper "Bergische Landeszeitung."

In 2016 the police distributed approximately 300 meals to inmates, with 642 people spending time in the cells, the paper reported.

The state interior ministry told "Express" that McDonalds did not fit regulations and was an "emergency solution."

A convicted rapist's bold dash for freedom through a bathroom window stunned Germany last year after details emerged that his handlers had left him unsupervised. The case highlighted gaping holes in prison security. (13.01.2017)

With almost 3 billion non-recyclable single-use cups being used every year, Germany is being forced to wake up and smell the coffee. Environmentalists are calling for a deposit system with multi-use cups. (08.12.2016)