The outgoing German president has used his last major address to call upon Germany to defend democracy in the face of increasing threats. He urged Germany not to shy away from taking on international responsibility. 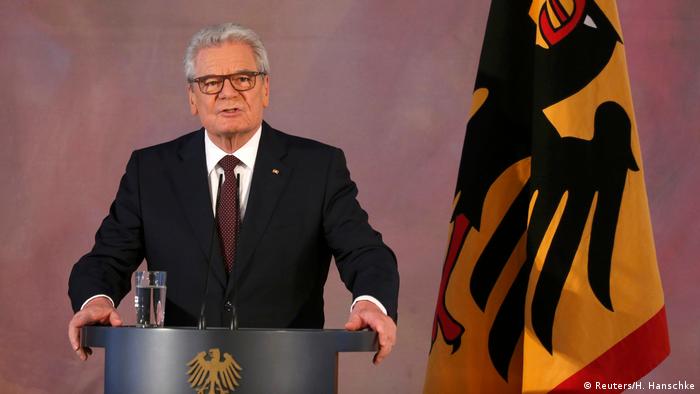 German President Joachim Gauck on Wednesday made his final major address to the nation from his residence at Bellevue Palace in Berlin.

Entitled "What should our country be like?," the outgoing president used his last speech to emphasize the importance of a resilient democracy and robust security policy.

Gauck called today's Germany "the best and most democratic Germany we have ever had," but warned that "liberal democracy and the political and normative project of the West is under fire."

Only a resilient democracy is able to defeat the threat of violence and terror, he said, before calling on citizens to do more to defend democracy in the face of current challenges.

Joachim Gauck: From rebel GDR pastor to president of a unified Germany

Joachim Gauck's life has been intertwined with several important chapters in the country's history. Like Chancellor Merkel, the outgoing president hails from the GDR. Unlike Merkel, Gauck's known for speaking his mind. (18.01.2017)

"Even the small selection of headlines from the past two years that we have just seen reminds us that the world is not only full of contradictions, but also that much has turned out differently to what we expected a good 25 years ago, when the Berlin Wall fell and we cherished a dream of a Europe of free and liberal democracies," Gauck said.

Amid a regrouping of powers and new rules being dictated, the outgoing president said that today's dividing line was between Democrats and non-Democrats, adding that "those who love democracy will protect it."

It is exactly in light of current challenges that democracy shows itself as the most adaptable and pluralist form of governance, he said.

Gauck outlined how he viewed Germany's role on the global stage in light of increasing changes in the international order.

The outgoing president urged Germany not to shy away from its international responsibility. "If we overlook the potential within us, we will be bogged down in eternal political standstill, in a baneful culture marked by fear, indifference and self-doubt," he said. "Every day, we must ask ourselves if we will lose our credibility if we do not oppose at least the most egregious cases of inhumanity and brutal persecution, and of the annihilation of human life."

Gauck also called on Germany to work closely with its allies in countering attempts to split the European Union, which he described as a "project of peace and prosperity."

On migration, Gauck warned that further crises would follow "unless Europe's external borders are secured efficiently, unless we have a regulated European immigration policy, and finally unless the living conditions in the countries of origin improve."

He also called on Germany to do more in preserving peace and advocated a pan-European defense force, warning that "the basic conditions for peace and dialogue are at stake."

Gauck, a retired pastor from the former East Germany, became president in 2012.

He is expected to be succeeded by Foreign Minister Frank-Walter Steinmeier, a Social Democrat, in March.