German President Joachim Gauck has described the 1915 slaughter of Armenians by Ottoman Turks as "genocide." The comments, which are likely to infuriate Ankara, come as Berlin prepares to reclassify the killings. 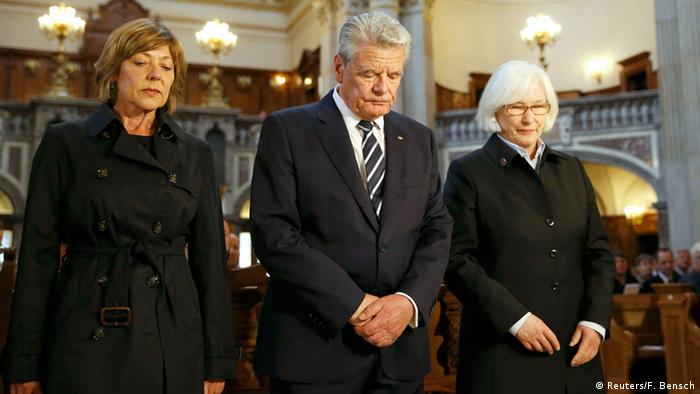 German President Joachim Gauck made his speech at a nondenominational religious service at Berlin Cathedral on Thursday, the eve of the 100th anniversary of the bloodshed that is estimated to have led to the deaths of as many as 1.5 million Armenians.

In the highly anticipated speech, Gauck spoke of a "genocidal dynamic to which the Armenian people fell victim," and of "systematic acts of murder."

The president went on to use the word "genocide" directly in a passage referring to the possible complicity of Germany, a World War One ally of the Ottoman Empire, in the events a century ago. German troops were alleged to have been involved in planning and even implementing deportations.

"In this case, we Germans collectively still have to come to terms with the past, namely when it comes to shared responsibility and perhaps even complicity in the genocide of the Armenians."

In referring directly to genocide, Gauck went further than a German coalition statement that is set to be put before lawmakers for approval on Friday. That statement uses a more indirect formulation, denoting the Armenian deaths as: "exemplary of the mass-extermination, ethnic cleansing, deportations and, yes, the genocides during the 20th century."

German government officials said there had been an exchange of views between the president's office and the government.

Armenians have said their ancestors were killed in a concerted campaign of genocide that was ordered by the Ottoman leadership that ruled Turkey at the time, in an effort to drive the ethnic group of eastern Turkey. The issue still divides the Turkish and Armenian governments.

Turkey claims the 1.5 million figure is inflated and that those who died were killed as a result of war and unrest rather than a policy of genocide. It has also contended that hundreds of thousands were killed on both sides.

Genocide was defined by the UN in 1948 as "acts committed with intent to destroy, in whole or part, a national, ethnical, racial or religious group."

More than 20 countries - France and Russia among them - have so far recognized the Armenian killings as genocide.