A police union has triggered outrage with a tweet calling on its followers to choose a politician as a taser guinea pig. The union has been lobbying for officers to be equipped with the electroshock weapons. 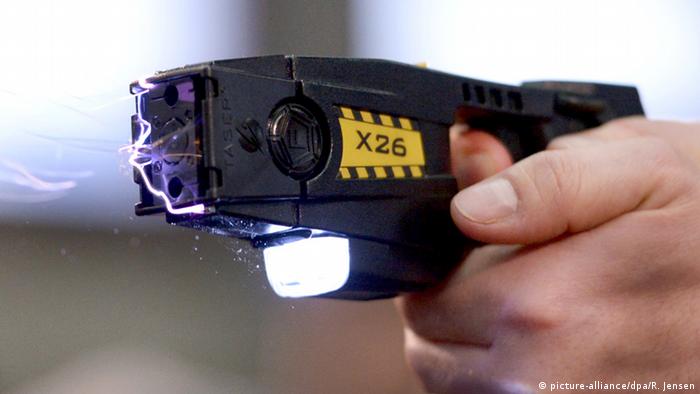 Last Saturday, one of Germany's two major police unions tweeted what looked like a joke. "Who should the Berlin police recruit as a taser test pilot?" the Berlin branch of the German Police Trade Union (DPolG) asked its followers, and offered four of Germany's prominent politicians as test bunny options for the electroshock weapon.

The public uproar was swift, and the union duly deleted the tweet, though less out of regret and more to correct a "misunderstanding." "We have deleted the poll from our profile," the union tweeted. "The impression that tasers can be a torture instrument is wrong."

The DPolG did not mean it as a joke. "I am totally behind our colleagues on the Twitter team," Berlin chief Bodo Pfalzgraf told the "Berliner Zeitung" with a straight face. "All we wanted to do was encourage the politicians who had criticized the use of tasers to try them out themselves."

In fact, the union went on to claim in another tweet, the idea had been to ask which politicians should try out the taser, and not who they should be tested on. 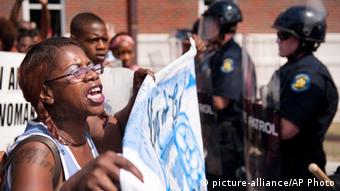 Several people have been killed by police tasers in the US

But that is not how the politicians in question took it. Three of the four options in the poll - Christoph Lauer of the Social Democratic Party (SPD), Renate Künast of the Greens, and Henriette Quade of the socialist Left party - have all criticized police use of force in recent months, and all reacted to the DPolG tweet with a mixture of sarcasm and outrage.

"I'm lost for words. Something like this is unacceptable in a democracy," Lauer told the "Berliner Morgenpost," before demanding that the Berlin police itself distance itself from the statement. (The Berlin police released a statement on Monday doing exactly that, before adding that it "regretted that the impression often arises, or is consciously propagated, that unions speak on behalf of the authorities.")

Künast was equally unimpressed - having recently been criticized for questioning whether police officers needed to shoot dead the Würzburg ax attacker, the Green party politician sent out a barbed tweet of her own in response to the DPolG, which read: "Anyone who knows anything about it, knows that the DPolG is tiny. The police thinks differently." DPolG, representing around 94,000 officers, is the smaller of Germany's two police unions. The larger GdP, which has around twice as many members, called its rival's tweet "tasteless."

But Quade was the most angered by the tweet. The socialist politician released an open letter to the DPolG in response to the tweet, in which she described herself as "filled with a certain bewilderment," at how "flippantly you as police officers provoke violence and torture fantasies towards politicians on the one hand, while simultaneously downplaying the taser as a weapon." 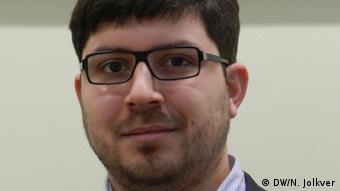 Lauer has angered the police with his taser criticism

This isn't the first time that DPolG has found itself exchanging angry statements with leftist politicians - in particular Lauer and Quade - over the taser. In March, Stefan Perlbach, DPolG deputy chief in Quade's home state of Saxony-Anhalt, allowed himself to be tasered in front of the press as part of a publicity stunt. "As you can see, I'm alive. Everything's fine," he told reporters who had just watched him collapse and lie prone for 30 seconds after being on the receiving end of the weapon's two electrode-darts.

The DPolG has been lobbying for every German police officer to be routinely armed with a taser, but so far politicians have largely resisted the request, though Berlin's Interior Minister Frank Henkel said in August he intended to test them out before the end of the year. "Even below the death threshold, the electroshocks can cause serious health damage, such as epileptic fits, cardiac arrest and serious injury to the arteries and the central nervous system," Quade said in March following Perlach's self-experiment.

There have been a number of deaths and injuries related to taser use. According to "The Counted," the "Guardian's" database of police killings, 66 people have been killed in the US by police tasers since the beginning of 2015. Meanwhile, in the UK, the public debate around tasers resurfaced in August after 49-year-old former professional footballer Dalian Atkinson died after being struck three times by a taser that delivered a 50,000-volt shock.

But the DPolG argues that tasers can be more effective than pepper spray or batons in certain situations, and have shown little patience with the objections raised by politicians.

Following a recent spate of police shootings in Germany - including one in which an Iraqi father of three armed with a knife was shot dead by officers outside a refugee home - Lauer provoked police anger by tweeting, "I'm slowly getting the impression that the Berlin police will keep shooting a man with a knife every week until the taser arrives." In response, Pfalzgraf dismissed the politician as a "political tadpole."

Berlin police have shot dead an Iraqi father of three after he attacked a man in custody accused of sexual abuse. The incident has underlined concerns over mass refugee shelters - though authorities say they are rare. (28.09.2016)

The head of Germany's intelligence agency has said authorities received a tip in September that 'IS' was planning an attack. Bomb plot suspect, Jaber A., was detained after police found explosives in his apartment. (11.10.2016)

Far-left riot in Berlin ends in injuries and arrests

Left-wing extremists and police have clashed in Berlin after months of tension. Some 1,800 officers were on duty to patrol demonstrators upset with the constant police presence outside a popular left-wing meeting point. (10.07.2016)