German authorities said the arrest showed the close cooperation between European security agencies. The suspect and an Austrian teenager have been accused of plotting bomb attacks in Germany. 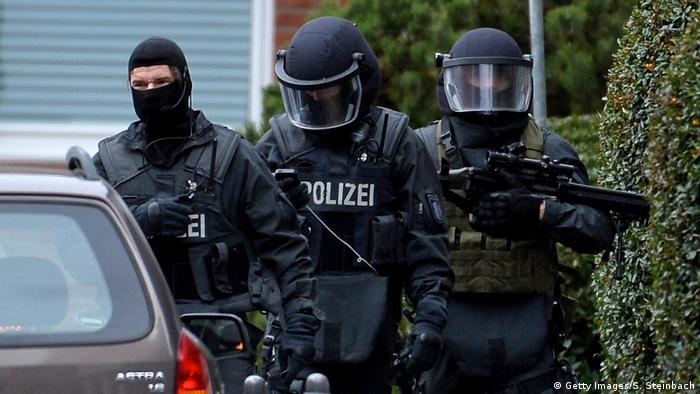 Police in Vienna have arrested a terror suspect believed to have planned an attack in the Austrian capital. The city has been on high alert since a terrorist rammed a truck into a Berlin Christmas market in December. (20.01.2017)

A suspected "IS" terror cell uncovered last year is said to have even fixed the ideal days for an assault in the German city. A court ruling said that both bombs and guns were to be used. (19.01.2017)

German police arrested a 21-year-old man accused of "planning a serious crime targeting the state," they announced on Sunday.

Authorities have alleged the suspect was linked to an Austrian teenager who was arrested in Vienna on Friday. He was alleged to have been planning a terrorist attack.

Police suspect he was linked to radical Islamist groups. The Austrian teenager, of Albanian heritage, had stayed in Neuss as a guest of the 21-year-old and discussed attacks against the German armed forces, a spokesman for the prosecutor's office in Düsseldorf said.

"The correlation of the investigation between the current case and Germany is clear," the spokesman of the Austrian Ministry of the Interior said on Sunday.

On Saturday the Austrian ministry said the Vienna arrest had foiled an imminent attack, possibly on the Vienna subway system.

There were "indications that such an attack was planned and just about to happen," Konrad Kogler, the ministry's General Director of Public Security, told Austria's "ORF Radio." The explosion of a bomb in the underground was "one of the possible scenarios," he said.

"Focus" said the man and the teenage suspect were believed to have "experimented with material to build explosives" in the flat in Neuss. It cited anonymous judicial sources for the story.

It reported that police confiscated computers and mobile phones from the home, and temporarily detained the suspect's wife.

"Focus" said the Austrian teenager told investigators that he had sworn allegiance to the so-called "Islamic State" (IS) group and revealed the link to the accomplice in Germany.

"The arrest shows that the security authorities are cooperating well, quickly and confidently in the fight against terrorism," said Interior Minister Ralf Jäger.

On Friday, German Federal Minister of the Interior Thomas de Maizière contacted his Austrian colleague Wolfgang Sobotka and offered support, according to a ministry spokesman in Berlin.

Germany was on high alert after a December terror attack on a Berlin Christmas market.