German Officials Dig Up Neo-Nazi Grave to Remove Swastika Flag | Germany| News and in-depth reporting from Berlin and beyond | DW | 30.07.2008

German officials said on Wednesday, July 30, that they had dug up a neo-Nazi's grave to remove a swastika flag that had been draped over the coffin. 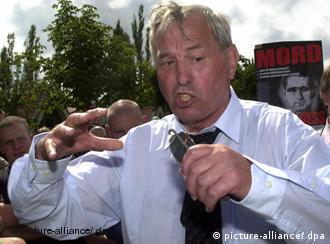 The Nazi-style burial of Friedhelm Busse on Saturday in Passau in south-eastern Germany ended in violence at the cemetery and a mid-town rampage where neo-Nazis punched a Mongolian woman in the face.

Police detained a right-winger after he slipped the swastika flag out from under his jacket and placed it at the last moment on the casket of Busse, the last leader of the Free German Labor Party which was outlawed in 1995.

The display of swastikas and advocating Nazi doctrines are crimes in Germany.

Passau senior prosecutor Helmut Walch said the soil was pulled away and the flag was recovered by police on Monday.

Reporters said the flag was cast on the grave by Thomas Wulff, an activist in the far-right National Democratic Party NPD. If he were convicted of displaying an "unconstitutional symbol," he could face a fine or up to three years in jail.

Walch said an inquiry was continuing into the violence by 90 admirers of Busse against anti-Nazi groups who were observing them at the Passau cemetery and against police who intervened.

Police detained a total of 11 far rightists on the day.

A journalist, 35, reporting for the "Network against Nazis" group was knocked to the ground and kicked and a woman, 18, was assaulted. A Mongolian woman was later attacked in the Passau downtown area, apparently because of her appearance.

Germany's national council of Jews was among groups which voiced outrage that the racists had been able to terrorize people.