According to German media reports, the chief executive of railway operator Deutsche Bahn, Rüdiger Grube, has resigned following a dispute with the board over the terms of his new contract due to be extended soon. 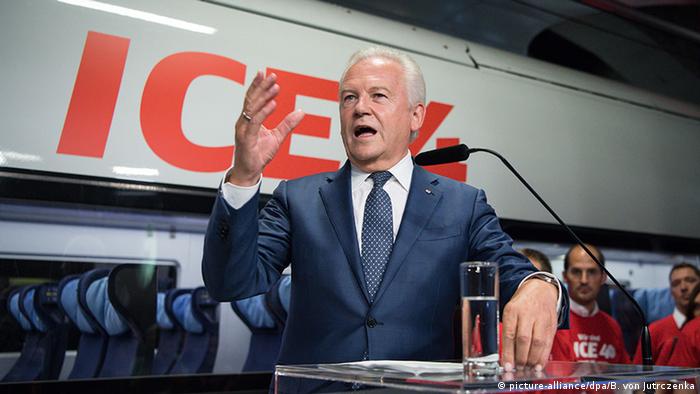 German news agency DPA reported Monday that the 65-year-old Deutsche Bahn chief executive (CEO) stepped down during a meeting of the German rail operator's supervisory board, which had originally been scheduled to extend his contract.

Quoting sources who took part in the meeting, Grube's decision came after the board had refused to grant him a three-year extension of his contract until 2020, DPA said. The supervisors had offered him only a two-year extension instead, it said.

A group of passengers in Munich decided to help get their local train out of a tunnel by pushing it into the platform. German railway company Deutsche Bahn thanked the customers for their help. (06.06.2016)

Negotiations for a second term with Grube at the helm of Germany's state-owned railway enterprise have been dragging on for months, with media reports saying the CEO offered to accept a salary freeze in exchange for a longer contract. Grube was even said to have relinquished his right to claim compensation should his contract be terminated before it expires.

Grube has held the post of Deutsche Bahn CEO since 2009. The company employs about 300,000 people and made a profit of 2 billion euros ($2.13 billion) on revenues of 40 billion euros last year. The low point in his career was a loss of 1.3 billion euros the company accrued in 2015.

Throughout his career, Grube faced criticism from the government in Berlin because the railway has been known for delays and running an investment backlog regarding rail infrastructure and rolling stock.

According to DPA, Deutsche Bahn's financial chief Richard Lutz is to run operations until a new CEO has been found.