German photographer Michael Wolf has passed away in Hong Kong, where many of his famous megacities images were taken. Wolf's photographs provide a unique perspective on themes including urban density and mass production. 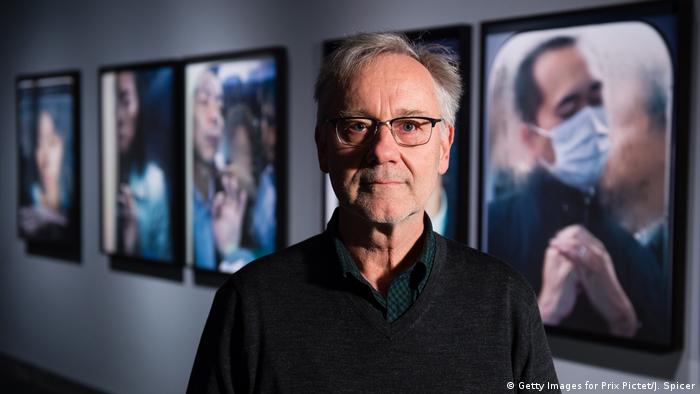 Michael Wolf, an award-winning German photographer best known for his documentation of life in megacities, has died at his home in Hong Kong.

Wolf died in his sleep on Wednesday aged 64, Sarah Greene, an art gallery director who worked closely with him, said on Friday. She did not give a cause of death.

Greene, who helped run Wolf's studio and organized some of his exhibitions and book launches, called Wolf "a sensitive observer who perceived the world like no other."

Wolf's work depicted the intense urban development that has overtaken some parts of the world and explored themes of mass production, innovation and the relationship between the photographer and the public.

He won first prize in the World Press Photo competition twice, in the contemporary issues category in 2005 and in the daily life category in 2010. His body of work included Tokyo, Chicago, Paris and Hong Kong, where he spent most of his life.

From Germany to Hong Kong

"His main muse was Hong Kong," said Greene, the director of Blue Lotus Gallery. "Hong Kong was his favorite city, which kept inspiring him, zooming out on the beehive with his iconic work Architecture of Density and zooming into the veins of the city exploring the vernacular beauty of the back alleys."

Born in Munich, Germany, Wolf grew up in the United States and Canada and studied at the University of California, Berkley, and Folkwang University of the Arts in Essen, Germany, where he studied under photographer Otto Steinert.

He moved to Hong Kong in 1994, where he worked as a photographer for Stern magazine before focusing on his own projects, many of which were turned into books.

In his Tokyo Compression series, Wolf turned his camera from buildings to the captive passengers pressed against the windows of the crammed Tokyo subway. "The density is no longer architectural but human, as commuters fill every available square inch of these subway cars," the series description reads.

Wolf won an honorable mention in the 2011 World Press Photo competition for his A Series of Unfortunate Events series, which saw him use his computer to capture scenes he found while exploring Google Street View.

The decision stirred controversy, with some critics questioning whether the appropriation of Google Street View could be considered photography.

But from Wolf's perspective, the series "raises questions about privacy in the modern city and highlights the double standards relating to governments' attempts to regulate street photography while Google is creating an unauthorized photographic map of the world."

Dirty air is not only the stuff of megacities. Research shows it claims most lives in rapidly-urbanizing countries and places where people burn polluting fuel for heat. (14.03.2019)

Goodbye to fields: What food production may look like tomorrow

Vertical farming and lab meat are new trends in agriculture that some say could feed the rising populations of our megacities. Kerstin Schweitzer offers a first glimpse of the future at the Global Food Summit in Munich. (22.03.2019)