Dense and compressed: Life in Hong Kong or Tokyo is challenging for its inhabitants. German photographer Michael Wolf has explored their reality through his award-winning works, now on show in Hamburg.

Monotonous, static, colossal: A large-format photo of a residential complex in Hong Kong reveals neither the sky nor the ground, "giving the viewers of the work the impression that they are right in the middle of this huge metropolis," says Ingo Taubhorn, curator of the exhibition "Michael Wolf: Life in Cities" at the House of Photography in Hamburg's Deichtorhallen art museum.

The retrospective of the award-winning documentary photographer's career includes photos from his beginnings as a student as well as his most recent works, shown publicly for the first time.

Throughout his oeuvre, the photographer has explored topics such as mass consumption, privacy and overpopulation, showing how people live in major cities such as Hong Kong, Tokyo, Chicago and Paris.

"Michael Wolf does not reinvent photography; he uses it in a very simple way. He approaches reality without manipulating it. He's just an observer, but one with an incredible sense of particular situations," says Taubhorn, who is particularly impressed by the series "Tokyo Compression." "Michael Wolf took these pictures at a specific subway station in Tokyo, photographing people who travel long distances every day to get to their job. The photos are both disturbing and fascinating at the same time."

Another one of the photographer's famous series, "Architecture of Density," is also on show in Hamburg. It focuses on the architecture of Hong Kong, one of the most densely populated cities in the world. As the facades are photographed from a certain distance, the patterns almost create the impression that it's a painting. You only notice upon a closer look that there are people on the balconies, for example hanging their laundry, points out the curator of the exhibition. 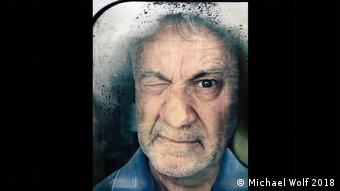 A self-portrait of the photographer in the Tokyo subway

Born in 1954 in Munich, Michael Wolf was given his first camera 14 years later, as a birthday present from his parents.

He spent his childhood and youth in the US and Canada, but studied photography in Essen, Germany, where he then worked as a freelance documentary photographer.

He later moved to Hong Kong, working among other for the German magazine Stern. His stays in major cities such as Hong Kong and Paris, inspired him to further explore the extreme density, anonymity and dynamics of everyday life in megacities.

The exhibition "Michael Wolf: Life in Cities" is on show until March 3 in the House of Photography in Hamburg.

Using herself as model, American photographer Cindy Sherman critiques our contemporary views of identity and the role of women in society. A look at the work of the 2019 Max Beckmann Prize winner as she turns 65. (18.01.2019)

Entertainers, families, and entrepreneurs modeled for photographer August Sander. His portraits of German society marked a turning point in the history of photography, and can now be seen at an exhibition in Cologne. (24.12.2018)

Pete Souza, the former White House photographer under President Obama, has released "Shade: A Tale of Two Presidents," a book filled with archived pictures that may induce nostalgia. (16.10.2018)