All eyes are on Germany's most-populous state North Rhine-Westphalia, where parties face a test ahead of the 2021 national election. Some 14 million people are eligible to vote for mayors in the former industrial hub. 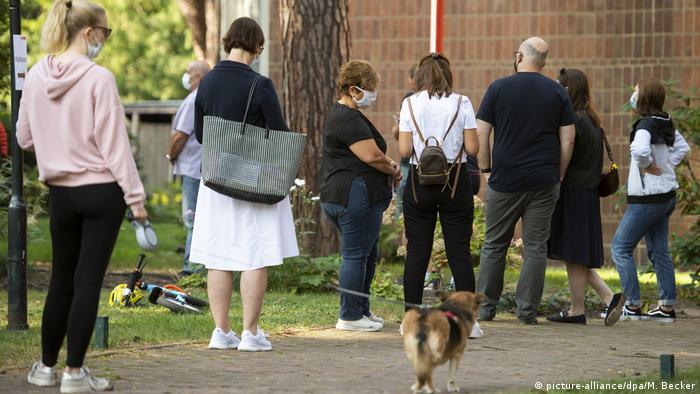 Some 14 million residents, aged 16 and older and having German citizenship, were eligible to vote in the western German state, which includes the former coal and steel heartland of the Ruhr District.

With Chancellor Angela Merkel set to retire ahead of Germany's 2021 federal, the NRW election is being watched for trends, including forecasted gains for the Greens, and closely run mayoral races in both Dusseldorf, NRW's regional capital, and Aachen.

That city, near Germany's meeting point with Belgium and the Netherlands, is home to Armin Laschet, NRW's Christian Democrat (CDU) premier and a hopeful to replace Merkel.
Read more:
What is the role of Germany's parliamentary opposition?

In surveys, the traditionally trade union-affiliated Social Democrats (SPD), led by Sebastian Hartmann, were expected to retain holds in Dortmund and Duisburg but faced a tough battle in 11 other main cities.

That was despite lengthy campaign tours by the federal SPD's joint leadership, Saskia Esken and Norbert Walter-Borjans.

The Greens, federally in opposition, are favored by young voters. The party could emerge strongly in Bonn and Aachen, where Green Sibylla Keupen could become mayor.

In Dusseldorf, incumbent SPD mayor Thomas Geisel and the CDU's Stephan Keller were polling neck-in-neck, likely to result in a run-off on September 27.

Cologne, Germany's fourth-largest city, was expected to re-elect mayor Henriette Reker, an independent backed by the Greens and Laschet's CDU, who in 2015 survived a knife attack on election eve.

According to pollster Infratest/dimap, councilor candidates for the far-right Alternative for Germany (AfD) could score in Duisburg, Essen, and Siegen.

Cologne was expecting record postal voting, with some 230,000 applications for papers already submitted, representing a quarter of all eligible city electors.

At its last communal elections, NRW's postal option was used by 26.5%

Also being elected across NRW on Sunday were county legislatures.

NRW, with a total population of 18 million, children and foreign residents included, has 373 cities, towns, and communities, with 23 larger municipalities, the largest being Cologne, and 31 counties. It is Germany's most populous state.