Three months after the truck attack on a Berlin Christmas market, domestic intelligence officials say they can’t rule out further attacks. They add that there are other reasons to be concerned about security in Germany. 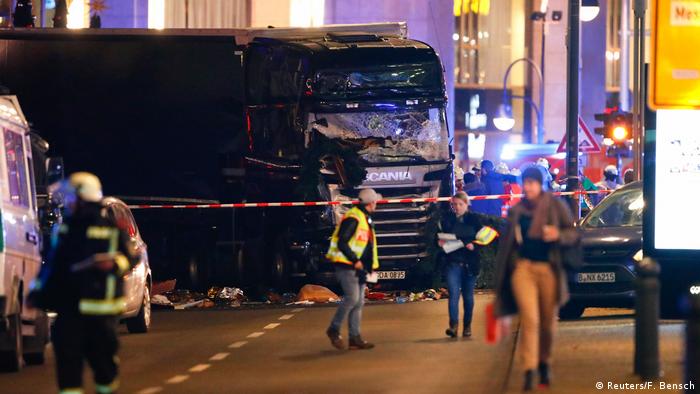 It happened just a few days before Christmas. The very thing German security officials, supported in part by foreign intelligence services, had long been able to prevent: a terrorist attack, claiming many lives. Jihadist Anis Amri killed 12 people on December 19 when he drove a stolen truck into the crowds at a Christmas market in Berlin. Now, the Federal Office for the Protection of the Constitution (BfV), Gemany's domestic security agency, has warned that it could happen again. "We continue to have a high threat level in Germany," said BfV President Hans-Georg Maassen.

Speaking to journalists, he said that an important indicator was the high number of leads that his office continues to receive both nationally and from foreign sources. "We are seeing a qualitative change in the type of information we're getting," Maassen said. Every single tip is investigated thoroughly. During the period after the Berlin attack until the start of this year, 20 so-called unspecific threat indicators were examined. In the best-case scenario, security officials are able to discover plans for attacks and prevent them from happening.

The BfV also considers information leading to raids on apartments or arrests by police officers to be a measure of success. In this regard, the hotline on Islamist terrorism, or HiT, is becoming ever more significant. The number of contacts via the hotline in 2016 (1,100) more than doubled compared to the number recorded in 2015. But, as Maassen said, there has also been growth in the number of potentially violent Islamists, with the figure currently standing at almost 1,600. There is no doubt, he said, that Germany is increasingly becoming a focal point for the terrorist militia Islamic State, or IS.

Maassen also said that he is concerned about developments in Turkey. "For a long time now, we've observed that the conflicts playing out in Turkey also affect the security situation in Germany," he said, adding there is a danger that proxy conflicts could escalate between members of the Kurdish PKK and nationalistic or right-wing Turkish extremists. The PKK is officially classed as a terrorist group by Germany and the EU.

Many observers say that the diplomatic dispute between Ankara and Berlin over appearances by Turkish politicians in Germany could spill over. Or, to quote Maassen: "The fault lines between the different camps in Turkey are reflected one to one here in Germany."