Bashar Assad's regime will find itself unable to continue, the head of Germany's foreign intelligence agency said. Syrian authorities have warned that rebels have gained control of a chemical warehouse. 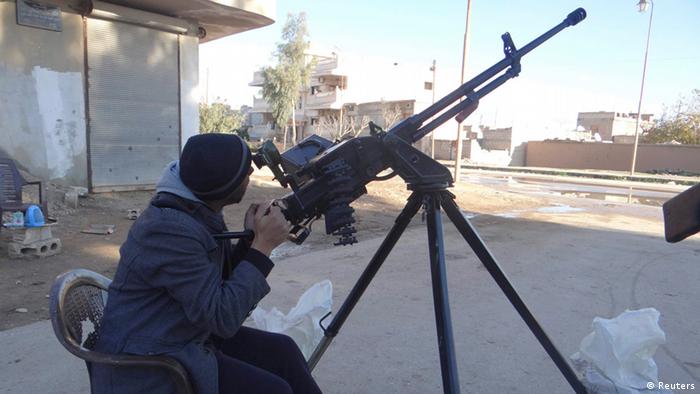 "Armed rebels are co-ordinating better, which is making their fight against Assad more effective," Gerhard Schindler told the German newspaper Frankfurter Allgemeine Sonntagszeitung in an interview made public on Saturday.

"Assad's regime will not survive," Schindler said. "Evidence is mounting that the regime in Damascus is now in its final phase."

Schindler's comments come as Syrian authorities made public a letter to the UN Security Council warning that rebel forces may possess chemical weapons after gaining control of an industrial warehouse where toxic chlorine was reportedly being produced.

"We are seriously afraid that some countries that support terrorism would supply chemical weapons to the terrorist armed groups and claim that the Syrian government is the one that is using them," the letter outlined.

The statement from Syrian authorities came as the United States and Britain expressed fears Assad's regime might use chemical weapons as rebels fight to take Damascus.

Fighters linked with the rebel al-Nousra Front, activists say, have taken control of the Syrian-Saudi Chemicals Company factory close to the town of Safira, east of Aleppo.

Since March 2011, Syria has been rocked by unprecedented protests aiming to topple the regime. The UN says at least 30,000 people have been killed. Read DW's multimedia coverage and analysis of political unrest in Syria. (05.12.2012)

The ministry insisted in its correspondence with the UN that it would "not use chemical weapons under any circumstance, if they exist."

"Syria is defending its people against terrorism, which is supported by known countries, with the United States at the forefront," it added.

British Foreign Secretary William Hague, speaking from a security conference in Bahrain on Saturday, said there was proof the Syrian government could use its chemical weapon stockpile to quell the revolt in the country.

"We are extremely concerned about the stockpiles of chemical and biological weapons, and we are also concerned about evidence during the last couple of weeks that the regime could use them," he told reporters.

The option of military intervention in Syria, he added, had not been "ruled out," but he said that Britain would continue to seek a peaceful transition.

On the ground, rebel forces are trying to seize Damascus airport and the main roadway leading to it in an attempt to cut supplies to government troops. The sides have been fighting in the area for more than a week.