As public opposition to nuclear power remains high, the German government has announced new plans to phase it out completely in the next 11 years. And the proposal may have a chance at support from the center-left. 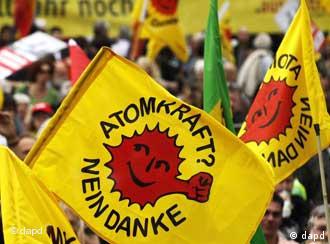 Public pressure to get rid of nuclear power has risen

The German government on Monday announced plans to completely phase out nuclear energy by 2022, a 14-year acceleration of its previous plans.

"It's definite: the latest end of the last three nuclear power plants is 2022," Röttgen told reporters. "There will be no clause for revision." 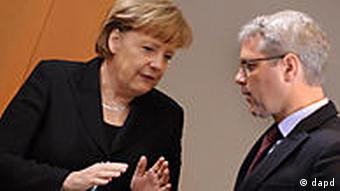 Last October, the German parliament voted in favor of a much slower nuclear shutdown, lasting until 2036. The government said that it was necessary to ensure the supply of Germany's energy needs.

The new timeline would keep those seven plants offline permanently. Six more would be shut down in 2021, and three would stay on until 2022 to ensure no disruption to power supply.

The government's announcement came just before an ethics commission on nuclear energy presented its findings in Berlin on Monday.

The commission's chair, former environment minister and CDU politician Klaus Töpfer, said he found "not recommendable" a specific provision to keep one of the older plants on stand-by as a "cold reserve" until 2013 to help protect against blackouts.

He also said the shutdown could feasibly happen sooner, but that if the government's plans are successful, along with further development of renewable energies, then "they could be a big opportunity for the future capabilities of the German economy."

The opposition Social Democrats and Greens remained skeptical of the plans, while not explicitly condemning or embracing them.

Green party chief Claudia Roth told the morning television show Morgenmagazin that there were "still many questions that are very, very open." She also said the government had not yet resolved the issue of a permanent storage facility for nuclear waste.

SPD leader Sigmar Gabriel specifically criticized the plans to keep an older reactor on stand-by, saying the idea had "little to do with technical feasibility."

Merkel's plans are similar to legislation passed in 2001 by the center-left government of Gerhard Schröder, which would have turned off the last nuclear power plant by 2022. 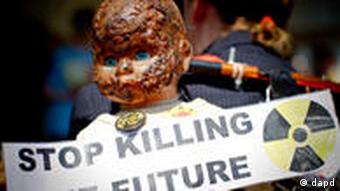 Protests against nuclear power have increased since the Fukushima disaster

In a statement released on Monday, environmental group Greenpeace called for a nuclear shutdown by 2015 and said Merkel's plans would expose "millions of people's lives to another 11 years of unnecessary danger."

Greenpeace activists on Sunday unfurled a banner atop Berlin's Brandenburg Gate reading, "Every day of nuclear power is one too many." More than 100,000 people also held demonstrations across Germany on Saturday, calling for a quick end to nuclear energy.

Shares of the nuclear power companies E.On and RWE fell 2.2 and 2.4 percent respectively at the opening of trading on Monday.

Chancellor Angela Merkel won national elections in 2009 with the pledge that she would extend the lifespan of the country's nuclear power plants. Her about-face raises quite a few questions, says DW's Peter Stützle. (30.05.2011)

Demonstrators across Germany are calling for an immediate end to nuclear power after an official commission recommended a decade-long phaseout. Some members of the government are concerned about the economic impact. (28.05.2011)