In a DW interview, Peter Post, a German innovator explains the bionic grappler, a high-tech helper modeled after an elephant's trunk. 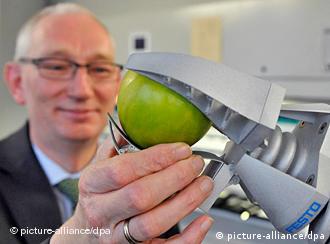 On Wednesday evening, the Festo company and its Bionic Handling Assistant were awarded Germany's annual Future Prize at a ceremony in Berlin.

The Bionic Handling Assistant, as it's called, was inspired by the the elephant's trunk, which has over 40,000 muscle fibers at its disposal to achieve such great flexibility. Peter Post, head of research at the Festo company and project spokesman of the Bionic Handling development team, said the invention was "a completely new assistance system compared to conventional robots" and could be used in assembly processes in industry, as well as to aid impaired indiviuals. In an interview with Deutsche Welle, the inventor outlined what this new product aims to achieve.

Deutsche Welle: Dr. Post, you have created a flexible grappler, or high-tech grip, that was modeled after an elephant trunk. How does it work? 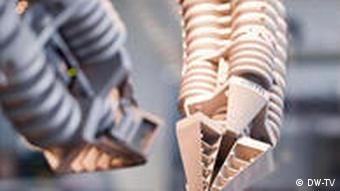 Peter Post: We used structures layered one behind another that can move like an accordion. When air is blown into them, each individual element can extend itself. A tremendous amount of mobility results when they all work together, giving the grappler eleven different possibilities for connected movement. Release of the air occurs in the corresponding chambers by which we achieve the same mobility and flexibility of an elephant's trunk. But unlike with an elephant's trunk, we can even extend the grappler.

What is so innovative about your invention? What does the trunk allow us to do that wasn't possible in the past?

With this Bionic Handling Assistent, we're entering into a whole new era of service robotics. Until now, service robotic systems have been rigid structures that have to be softened through adjustment settings. But with our invention, the core element has a very soft and flexible structure which can be used in interaction with humans without any additional security measures. We "harden" the trunk, or rather, make it move through appropriate optomatic/automatic controls and the intelligence inherent in that.

In other words, this trunk can do that things that only humans could previously perform?

More than anything, this grappler can aid interaction between human beings and technology. Until now, for safety reasons, robotic systems normally had to work far removed from people. The new system allows closer interaction, and due to its relatively simple construction and a special manufacturing process, we can develop the entire system very inexpensively - within a range that private individuals could afford.

In what areas can the grappler be used? 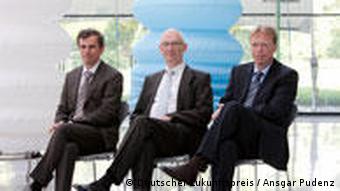 We've attached it to a mobile platform, for example, so it can be sent off to fetch things. It can also be used in the many places where people's movements are restricted - it can be attached to a wheelchair, for instance, and controlled via a joystick. The assistant can also be used as a kind of third arm and supplement one's own body movements. We envision the handling assistent being used in industrial processes like assembly, and in laboratories and repair shops. Someone working in one of these areas, then, would get a "third hand" to help him or her out in certain areas.

How successful has your Handling Assistant been on the market?

We're just in the initial phase. We have final prototypes that can now be put to test in real situations, and can give us an idea of their range of application and how that can be broadened. We can learn from these experiences and let that flow into the serial development process.

How did you come up with the idea of imitating an elephant's trunk? 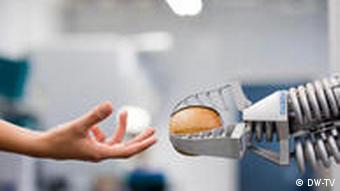 That's not an idea that just pops into your head under the shower. Instead, you have to systematize the search for ways of transposing biological principles into technology. That requires looking at the way nature works - and how it solves this or that problem. Then you try copying the system in technology in order to understand it. In the next stage, we contemplate how technical structures can be built which take advantage of nature's problem-solving principles.

Surely many different scientific disciplines are applied to that end?

Correct. The process can only work in an interdisciplinary way. Teams have to cooperate; people have to work well together, listen and understand each other. In the end, innovations develop at the points where the sciences and technical disciplines merge and connect. Even beyond the boundaries of a company, and in conjunction with universities and research institutes. For instance, we worked with the Frauenhofer Institute in Stuttgart.

What does receiving the German Innovation Prize mean to you?

It is a huge honor. I think something like that can only happen once in a lifetime. As people say, it's really the "Oscar" of technology.

Mechanical engineering is a pillar of the German economy. While machine builders can save costs in the short term by outsourcing production, in the long term, they can hurt themselves and the national economy. (17.09.2010)

Researchers in Germany have developed a new computer interface that responds to hand and finger movements. The system is reminiscent of the 2002 science fiction film, "Minority Report." (28.07.2010)

Robot Ranchers to Work on Wind Farms of the Future, Experts Say

Robot ranchers will tend the windswept ranges of sprawling wind farms in the future, according to a team of German robotic scientists. (22.02.2009)