Iran should use its influence to get the Syrian regime to discuss political transition, Berlin's top diplomat Frank-Walter Steinmeier told an Iranian newspaper. He gave the interview ahead of an official visit to Tehran. 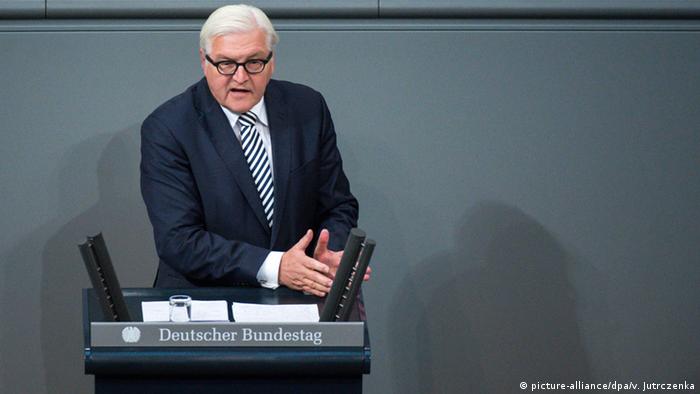 Germany and Iran must have a joint interest to "stop the bloodshed," in Syria, German Foreign Minister Frank-Walter Steinmeier told "Iran," the newspaper close to the Tehran government.

"I would like to see Iran using its influence to bring the Syrian government to the negotiating table, in order to discuss the beginning of the political transition process," Steinmeier said in an interview published on Saturday.

Only after the war ends, could there be a successful response to the extremists in the "Islamic State" group, which "spreads every day, like a tumor, amidst chaos and violence," Steinmeier commented.

The foreign minister also said he hoped for progress on solving conflicts in Afghanistan, Iraq and Yemen, which together with Syria have "sparked the biggest refugee disaster since the end of the World War II."

Steinmeier is visiting Iran on Saturday and Sunday, and is due to meet his Iranian counterpart Mohammad Javad Zarif and President Hassan Rouhani. It is the first official visit by a German foreign minister in 12 years.

The diplomatic trip follows the milestone nuclear deal between international powers and Tehran. The agreement, which was finalized in July, allows for the easing of economic sanctions in exchange for Iran reigning in its nuclear program.

However, the German official said that the deal is yet to be truly tested.

"Now it is Iran's turn to fulfill the conditions that were agreed upon for lifting the sanctions," Steinmeier said.

In addition, the minister urged the Shiite country to create a solid legal framework for German business seeking to invest in Iran.

"German companies want to commit for the long-haul, they are not interested in short-term profit," he said.

"It would definitely be no joy to sell him a used car," he said in the interview.

Steinmeier is set to stay in Iran until Sunday evening, and then leave for a visit to Iran's regional rival Saudi Arabia.