German Environment Minister: America is on a Better Path | Europe | News and current affairs from around the continent | DW | 10.12.2008

German Environment Minister: America is on a Better Path

The European Union must pay special attention so as not to gamble away its leading position on climate protection, Geman Environment Minister Sigmar Gabriel told DW-WORLD.DE 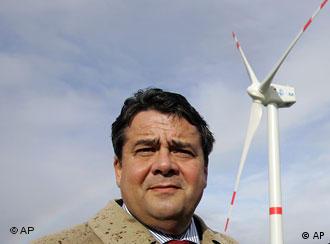 Sigmar Gabriel: The conference here is an important stepping stone on the way to a new climate protection pact, which should be decided by 2009 in Copenhagen. And as always with such contracts, it hinges on not starting too late to fix the structure of negotiations. There are several complex questions that need to be answered, such as ‘how should all this be financed?' and ‘which states should bear CO2 output reductions?' These questions are the subject of our talks in Poznan. But pioneering decisions will not be made here. Decisions on these topics raise still more questions. Who has which economic interests, and how does one organize a balancing of interests between developing countries, emerging markets and industrialized nations? These questions will be solved in the course of the next year.

You mentioned developing and emerging countries, which have negotiators here in Poznan. The so-called “adaptation fund,” with which the rich countries want to help poorer countries deal with the consequences of climate change, was supposedly agreed to one year ago. And yet this topic is being broached once again. Why?

Because the developing countries requested that we raise the financial commitment now. We are ready and willing to do this. But the scale of the commitment will be dependent on how willing the developing and emerging countries are to engage in climate protection. And because big decisions won't be made until 2009, only then can we take concrete steps towards these financial commitments. Questions we can answer now, however, are those such as: Which nations have the ability to adapt and which are entitled to receive money? These can be decided here in Poznan. During the next 12 months, we have to fill the climate treaty with all these concrete issues, but the structure of negotiations and the structure of the treaty should be decided here in Poznan.

Some large emerging markets, for example Brazil, Mexico and South Africa, have presented their own, voluntary initiatives. Is the EU under pressure to adopt a clearer position?

First of all it is great that these countries have taken such initiative. The South Africans and Mexicans are particularly progressive in these areas. The EU must pay attention so as not to be pushed from its leading position on climate protection into a situation where it is seen as not taking the matter seriously enough. America is already on a better path in this respect with its new president. This week the European Union will decide on how seriously it is to be taken in the international climate process. So it is important that in Brussels not only objectives are confirmed. The instruments that are dismissed there will ultimately allow the achievement of these purposes.

How important is a fair price for carbon in an emissions trading scheme?

Without a fair price for carbon in emissions trading you will not have incentives for those who are willing to invest in a low-carbon economy. As long as the emission of carbon dioxide into the atmosphere is priceless, or very cheap, nobody will be interested in saving carbon dioxide. So this is a key issue for the carbon market to have a fair price. What is a fair price? A price which shows us the scarcity of space in the atmosphere where you can deposit carbon dioxide.

Can you explain your concerns about French proposals for the energy sector?

There is no French proposal. There is a proposal of the presidency of the European Union to the East European countries which reflects the difficulties of the East European member states of the European Union to fulfil the reduction of carbon dioxide during the transition period or during the period when they have economic growth which is much higher than in the old European Union member states. This is not the problem. The problem is that if this proposal has an impact on, for example, the auctioning of carbon dioxide emissions among the old European member states, the western part of the EU, then it could create difficulties for the emissions trading system. But it mustn't necessarily be in this direction, but it's possible that we will create difficulties for the emissions trading system and I think the heads of state and government should be aware of these possible difficulties.

Is there a risk that Germany could be disadvantaged by it?

A new push to combat global warming at a UN climate change conference in Poland is being overshadowed by the world's economic downturn and rising greenhouse-gas emissions in rich and emerging nations. (01.12.2008)