Irregularities and loopholes in the German capital on election day have shocked many observers. Even though the results might not be affected, candidates and parties could still bring legal challenges. 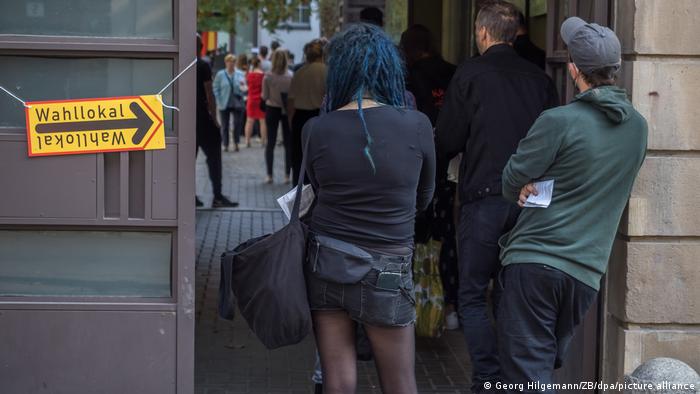 Chaotic scenes and embarrassing irregularities at Berlin's ballot stations during last month's general election have shaken confidence in Germany's election system, while providing ammunition for those who question the German capital's efficiency. On Thursday, October 14, final election results will be published, giving the green light for what are expected to be several legal challenges.

Berlin held elections at federal, state and local council levels on September 26, as well as a referendum on socializing major housing companies. In confusing circumstances, many voters in the German capital waited for hours at voting stations as election volunteers ran out of ballot papers, or ballot papers were delivered to the wrong districts.

The trouble had been predictable, given the simultaneous elections (voters often spent several minutes in their booths sifting through five different ballot papers), and yet voting stations seemed unprepared, forced into ad hoc measures to ease the impasse. Extra booths were set up, while new ballots were sent for from other voting stations — only for couriers to find their paths blocked by the international marathon that Berlin authorities allowed to go ahead on election day.

The confusion appeared to lead to several violations of electoral rules: There were reports that volunteers offered to allow people in if they didn't mind only voting in the federal elections, or even turned voters away though they were in line at the cutoff time of 6 p.m., when stations officially closed.

There have been no serious allegations of deliberate rigging, but confidence in the system has been shaken. "I was, probably like everyone else, fairly horrified and surprised, because there have never been mistakes and neglect to this extent in our elections — at least I can't remember anything like this," said Christian Pestalozza, a member of Berlin state's ethics commission and law professor at the city's Free University. "It's extremely serious — this is the most important action with which we can influence the composition of professional politics. And we have a right to demand that no mistakes are made. Such an accumulation of mistakes is disastrous."

There have already been political consequences. The head of Berlin's election authority, Petra Michaelis, stepped down three days after the election, accepting responsibility for the fiasco. Berlin's Interior Minister Andreas Geisel has opened an investigation, the initial findings of which he sketched out in a statement released on October 6.

In around 100 of Berlin's 2,245 polling stations, Geisel said, there had been "events that have to be investigated," especially in three of Berlin's most populous districts. Geisel insisted that the overall result of the state election would not be affected, but he did not rule out new elections in some districts.

To the evident relief of Berlin politicians, it's unlikely that the chaos affected the national election since only the local elections had different ballot papers from district to district. Berlin's outgoing mayor, Michael Müller, also insisted that the problems did not affect the results of the Berlin election, but he said at a press conference last week: "We have to admit it: There were mistaken assumptions and mistaken planning." A special parliamentary committee meeting came together to discuss the issue last Friday.

But what legal steps could be taken after Thursday, when election results are finalized? Candidates and parties (though not voters) who think there are enough grounds to challenge the results can do so, and they could take the matter all the way to Germany's Constitutional Court.

The courts must then decide whether the mistakes may have influenced the results. "To know that, we'd have to know exactly what mistakes happened, and how many voters were affected," said Pestalozza. "Then there might have to be new elections — but not across Berlin, only in the districts affected."

Legal challenges could also be hampered by a lack of regulation. Wilko Zicht, who runs the nonprofit electoral watchdog Wahlrecht, said the problem was that Germany lacks clear recount rules. "In other countries, such as the US, when the margin is less than half a percentage point, there is an obligatory recount," he told DW. "In Germany, if someone wins by only one vote, no one can demand a recount. You can only do that if you see clear procedural errors in the count." The burden of proof, therefore, is on the candidates.

Berlin has not yet reached that stage, but maybe more damning than the mistakes made on election day was the loophole left open that allowed ineligible minors to vote in the national election. Following September 26, it emerged that the federal election administrator Georg Thiel had sent a warning to his Berlin counterpart — the now-departed Petra Michaelis — about the possible abuse.

Thanks to warnings from both Thiel and Wahlrecht, the Berlin authorities scrambled to correct the mistake a few days before polling day by warning local stations to change their procedures to prevent this fraud during counting. But another loophole — allowing German nationals living outside Germany to vote in local elections using the same trick — was not closed in time.

It's unlikely that this trick was used on a scale big enough to affect the result, but the fact that it existed could give losing candidates and their lawyers plenty of ammunition after final results are released on Thursday.

An open padlock on the ballot box as Armin Laschet voted, and claims of a broken seal at another — the German election has faced accusations of election fraud. DW looks into these claims.