German Defense Minister Ursula von der Leyen has landed in Afghanistan as part of a traditional Christmas visit. The trip rounds off a bad year that has seen security in the war-torn country significantly deteriorate. 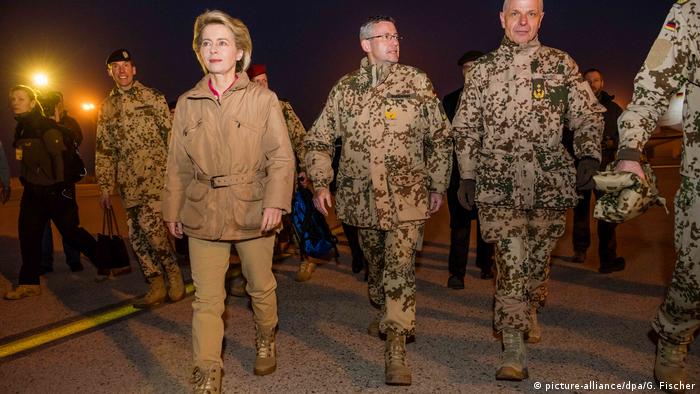 German Defense Minister Ursula von der Leyen landed Thursday morning at the Mazar-i-Sharif military base in northern Afghanistan, where the majority of German troops are stationed.

The trip marks von der Leyen's fifth visit to Afghanistan in three years. Since becoming defense minister in 2013, she has made a tradition of visiting troops stationed in the country during the run-up to Christmas.

Eight killed in Taliban attack on MP's house in Afghanistan

The Taliban has said an attack killing several MPs targeted "an important gathering of officials." Police have confirmed that civilians were also among the dead. (22.12.2016)

Attack on German consulate in Afghanistan planned for months: report

A bomb attack on the German consulate in Mazar-i-Sharif had been planned six months in advance in Pakistan, according to a media report. The Taliban claimed responsibility for the blast which killed six and wounded 128. (20.11.2016)

This visit, however, rounds off a bad year in which Afghanistan's security has been deteriorating.

Last month, the German consulate in Mazar-i-Sharif was attacked by Taliban insurgents, killing six people and injuring more than a 100. No Germans were harmed in the attack. However, the consulate, opened only three years earlier, was deemed unusable in the wake of the attack and abandoned.

This year, a United Nations report estimated that some 15,000 Afghan military personnel were killed or injured in the war against the Taliban between January and August. A further 8,397 civilians were also hurt or wounded in the first 10 months of 2016, although that number is likely higher when accounting for less accessible rural areas.

Overall, 33 of the country's 407 districts remain under Taliban control, while another 116 are under siege.

'We fight against those who terrorize'

Von der Leyen's visit also comes just days after an assailant affiliated with the so-called "Islamic State" plowed a truck into a crowd at a Berlin Christmas market, killing 12 people and wounding 48.

Speaking at a Christmas market set up in the Mazar-i-Sharif military base, the defense minister told soldiers that they were "responsible for making sure that we are not defeated by terror, that we fight against those who terrorize people."

"It is thanks to you that people are able to live freely, self-determined and with dignity," she said.

German troops to remain at least another year

Last week, Germany's parliament extended the military's mandate to remain in Afghanistan until the end of 2017 as part of an international coalition to train, advise and support local security forces.

Germany is legally allowed deploy a maximum of 980 soldiers in Afghanistan. Currently, 800 are stationed in Masar-i-Sharif and another 140 in the capital, Kabul.

Some 12,000 NATO troops are still deployed in Afghanistan, although military engagement formally ended two years ago. Like their German counterparts, NATO troops are in the country in an advisory capacity to help rebuild the nation.