Eintracht Frankfurt and Bayer Leverkusen have advanced to the semifinals of the German Cup, joining title-holders Bayern Munich and fourth-tier Saarbrücken in the final four. The semifinal draw is to be held on Sunday. 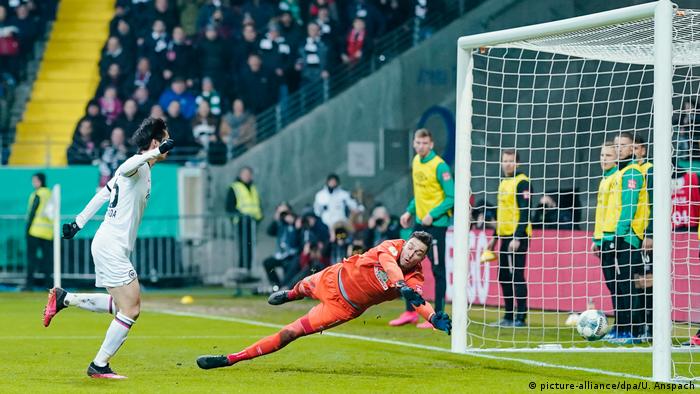 "If you've been to Berlin before, you want to get there again," said a smiling Kevin Trapp following Eintracht Frankfurt's 2-0 win over Werder Bremen in the Commerzbank-Arena on Wednesday night.

This was the penultimate step on the way to what Eintracht and their fans hope will be a third appearance in the German Cup final in Berlin in four years, having lost in the final in 2017 and raising the Cup after a Cinderella victory over the mighty Bayern the following year.

It was a victory that added to Frankfurt's growing reputation of being a cup team, not only domestically, but in the Europa League. But success in cup competitions also require a bit of luck, and in this case, Eintracht benefitted from an important call that went their way.

"It was a lucky call for us and the key moment of the game," Frankfurt coach Adi Hütter told ARD public television after the match.

He was referring to the play that turned the match, a penalty in the first-half injury time, which as a result of VAR. The video review showed that as Werder's Ludwig Augustinsson challenged for an aerial ball, it hit his hand as it was above his shoulders. Andre Silva converted the penalty clinically, and Werder coach Florian Kohfeldt received the yellow card for his protestations.

Daichi Kamada put the game away in the second by volleying home a lovely cross from Filip Kostic, who would later become something of a villain. 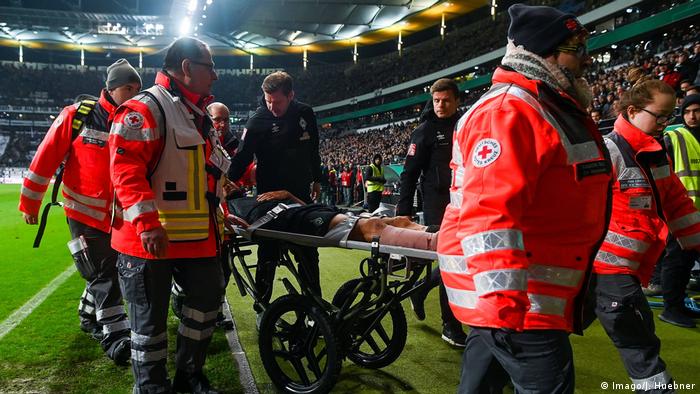 With seconds left to play in the match, Kostic stepped on Werder defender Ömer Toprak's right calf, and was promptly given a straight red. Toprak was taken off on a stretcher with a suspected fractured leg, while Kostic is set to miss Eintracht's semifinal. On Thursday, Bremen coach Kohfeldt said Toprak's injury had turned out not to be as serious as first feared.

"The wound was stitched last night in hospital and Ömer returned to the team hotel a little later," he said.

In the early match, Bayer Leverkusen came from behind to beat 10-man Union Berlin 3-1 to punch their ticket for the semis.

Marcus Ingvartsen gave the visitors the lead late in the first half, arriving at the back post to meet Marius Bülter's cross and power a header into the bottom corner. But Union were dealt a massive blow with just under 20 minutes to play as defender Christopher Lenz was sent off for a second bookable offence.

Karim Bellarabi equalized just a minute later, drilling a low effort into the bottom corner after being played in on goal by Kai Havertz.

The hosts completed the comeback in the 86th minute with Charles Aranguiz heading home Kerem Demirbay's corner before Moussa Diaby added a third in injury time.

Frankfurt and Leverkusen join title-holders Bayern Munich and fourth-tier Saarbrücken in the final four. The draw for the semifinals is to be held on Sunday.