A momentary lapse in concentration sent a high speed train hurtling towards a maintenance vehicle, killing 23 people. The men responsible have been sentenced to suspended jail terms. 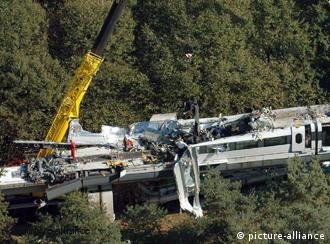 The train dispatchers were held responsible for the collision

Two German train dispatchers were sentenced to suspended prison terms on Thursday, after admitting they had made mistakes which led to a train crash in September, 2006. The accident, one of Germany's worst rail disasters, killed 23 people and injured eleven when a high-speed magnetic levitation train crashed into a maintenance vehicle.

"This was not a criminal but a momentary error," said the presiding judge Dieter Temming. The two had suffered greatly since the accident and were themselves both perpetrators and victims, he added.

The court in the north-western city of Osnabrück, near where the accident occurred, found the 61 and 52-year-old men guilty of causing death and injury through negligence.

Prosecutors had argued that the men were mainly responsible for the collision, although mistakes by others also played a role. They had demanded suspended prison terms of one year and 22 months, along with fines of 3,000 euro ($ 4,200).

The court issued suspended sentences of one year, and 18 months. The men must also pay the costs of the trial.

The two men had given the all-clear for the high-speed Transrapid train to start a test run on September 22, 2006, forgetting that the maintenance vehicle was still on the tracks near Lathen, a community close to the Dutch border. The test train was carrying a group of visitors.

A few seconds later, the maglev train smashed into the vehicle at 170 kilometers per hour, only coming to a halt after 500 meters with wreckage dangling over the sides of the elevated track.

The driver of the high-speed train was among those killed.

One of the defendants apologized and asked for forgiveness at the start of the trial on Thursday.

"I would do anything to undo this terrible accident," he said in court. 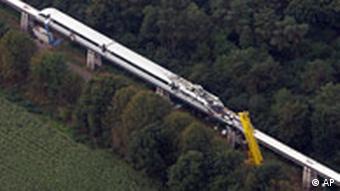 The accident was one of Germany's worst rail disasters

The supervisors were accused of failing to lay down procedures for the use of a blocking system to prevent a train from entering a section of track when there is another vehicle on it.

An electronic blocking system was available at the test track, but was not activated at the time of the accident, experts said.

The trial of the two train dispatchers had been delayed until now because the men were considered suicide risks after the crash.

A German court on Friday imposed fines on two supervisors for their role in a high-speed magnetic levitation train crash that claimed 23 lives on a German test track almost two years ago. (23.05.2008)

German Chancellor Angela Merkel visited the site of a German high-speed train crash on a test route in Emsland where 23 people died when the Transrapid train hit a maintenance vehicle. (22.09.2006)