German Chancellor Angela Merkel visited the site of a German high-speed train crash on a test route in Emsland where 23 people died when the Transrapid train hit a maintenance vehicle. 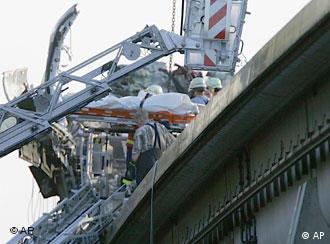 Police involved in the 150-person rescue operation said they had recovered 15 bodies early Friday evening, adding that the others were still thought to be trapped in the wreckage of the magnetic levitation train. Ten people survived with serious injuries.

"There's little hope of finding anyone alive in the wreckage," said a police spokesman seven hours after the collision on an elevated test track in Emsland, northern Germany.

In addition to Merkel, Transport Minister Wolfgang Tiefensee interrupted a trip in China to return to Germany. The chancellor and German President Horst Köhler sent their condolences to the families of the victims and thanked those who took part in the rescue operations. 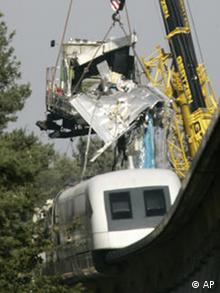 A crane lifts parts of the destroyed train on Friday

The magnetic levitation train was reported to be traveling at some 170 kilometers (106 miles) per hour when it hit a maintenance train.

What led to the accident remains unclear, but a spokesman for the operators of the track said initial investigations appeared to rule out a technical fault, indicating that human error was to blame.

The maintenance train was tasked with the daily cleaning of the Transrapid's track and was supposed to be removed from the track before the Transrapid starts on the 31.5-kilometer-long test track, which is four meters above the ground between Dörpen and Lathen close to the Dutch border.

"This accident would not have been possible if all regulations were adhered to," said Rudolf Schwarz, head of operators IABG, who additionally pledged to clarify the circumstances surrounding the accident "as soon as possible."

Some of the 29 passengers were family members and friends of employees who work for the firm that operates the track. Others worked for the energy provider RWE. Two people working on the maintenance vehicle were among the injured.

Private groups are often taken for pleasure trips on the maglev, which is capable of speeds of up to 450 kilometers per hour.

Plans for a Transrapid in Germany 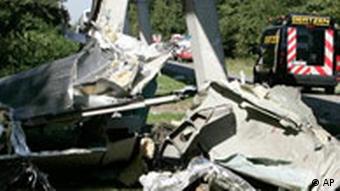 Maglev trains, called Transrapid in German, float on a magnetic field and are propelled by a linear induction motor and follow guidance tracks with magnets.

The Transrapid was built by a Siemens and ThyssenKrupp consortium between 1980 and 1984. ThyseenKrupp just this week threatened to sell the technology to China should Germany not build its own Transrapid line in Munich in the near future.

Talks on a 38-kilometer-Transrapid link from Munich to its airport are stalled over who will foot the 1.85 billion euro ($2.35 billion) bill.

Transportation Minister Tiefensee said Friday's accident would not have any bearing on the outcome of the Munich project.

German steelmaker ThyssenKrupp has threatened to sell the high-tech magnetic levitation technology used by the Transrapid train to China if German authorities fail to approve a domestic rail link for it in Munich. (19.09.2006)

German High-Speed Rail Technology Soon to be Made in China?

Germany's Transrapid consortium is still negotiating the conditions for expanding a magnetic-levitation rail connection in China. But, several cities there are vying to be the first to produce a similar rail system. (01.08.2006)

China has mastered a key part of the German technology to build high-speed magnetic levitation trains and is now aiming to cut the costs of its new line by one third, according to state press. (28.04.2006)