German High-Speed Rail Technology Soon to be Made in China? | Business | Economy and finance news from a German perspective | DW | 01.08.2006

German High-Speed Rail Technology Soon to be Made in China?

Germany's Transrapid consortium is still negotiating the conditions for expanding a magnetic-levitation rail connection in China. But, several cities there are vying to be the first to produce a similar rail system. 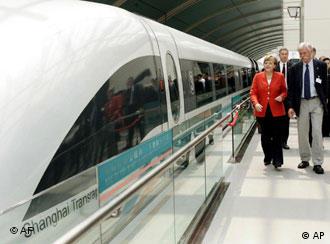 News reports that China is building its first magnetic-levitation (Maglev) rail system have been circulating in the media for months. A report published this week in the newspaper China Daily said the north-eastern port city Dalian planned to construct the first commercial Chinese-made Maglev train test line this year.

"Lines such as these are being built in great numbers in China," said Petra Aldenrath, the China correspondent in Beijing for German public radio network ARD. "They are all only short test stretches so far and the trains cannot be compared to those of Transrapid by the Siemens-ThyssenKrupp consortium."

A report in the China Business Daily confirmed that the German Transrapid was superior to its Chinese competition. The publication compared five Transrapid models developed in China.

"Our media mix truth and fiction. None of the models developed in China are ready for use," the paper quoted a Chinese Maglev train expert as saying.

The world's only commercial Maglev system in the world links Shanghai's financial district and its Pudong airport. Instead of mechanical components such as wheels and rails, the Transrapid system uses electronics: non-contact electromagnetic levitation, guidance, and propulsion systems. With an operating speed of 430 km/h, it travels the 30-kilometer stretch in some eight minutes. 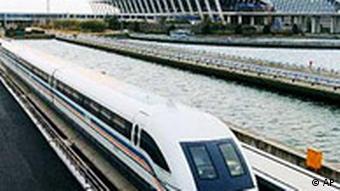 The Transrapid in Shanghai only needs eight minutes for 30 kilometers

The core technologies that have now been developed in China are based on a magnetic engine, which will drive the train on a three-kilometer railway to be built in the city's development zone, said Li Lingqun, chief engineer of the Maglev team in Dalian. This system will also be less expensive, he said.

"Combined with the abundant resources of permanent magnetic materials in China, our technology will be about 50 percent cheaper than that of foreign countries," Li said in the China Daily.

The Dalian train would reach speeds of 220 kilometers per hour, Li said.

But the technology based on such an engine was by far not as complicated as the Transrapid, said Aldenrath.

"It is illusory to think you can go 220 kilometers per hour on just three kilometers of tracks," said Transrapid spokesman Peter Wiegelmann. "You would need rocket propulsion for that."

China is planning an extension of its Shanghai connection to the city of Hangzhou, 180 kilometers away.

Earlier this year, Germany rejected China's demands for access to sensitive Maglev technology in exchange for building this $4.3 billion high-tech rail link. Chinese officials approved the building of the track in March. But discussions with the companies have been going slowly as Beijing is looking for significant technology transfers and funding as the price of admission.

"We are optimistic that our Transrapid will be employed on this stretch," Wiegelmann said.

Germany provided 10 percent of the $1 billion budget for the Shanghai airport link.

Product piracy was high on the agenda of German Chancellor Angela Merkel's trip to China. German businesses lose billions as a result, and offers to cooperate with counterfeiters don't seem to help. (May 22, 2006)

A maglev or magnetic-levitation train hovers above the track and uses electromagnetic force to propel itself forward at groundbreaking speed.

Food security concerns sparked by Russia's invasion of Ukraine are topping discussions as G7 foreign ministers meet in northern Germany. The talks also aim to support Moldova amid concerns that the conflict could spread.

Ukrainian President Volodymyr Zelenskyy railed against NATO's decision to reject a no-fly zone over his country. Meanwhile, the US called Russia's attack on a nuclear plant "incredibly reckless."