German Court Fines Men for Role in Train Crash | Germany | News and in-depth reporting from Berlin and beyond | DW | 23.05.2008

A German court on Friday imposed fines on two supervisors for their role in a high-speed magnetic levitation train crash that claimed 23 lives on a German test track almost two years ago. 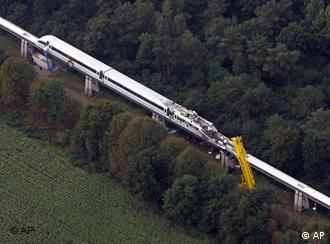 The crash diminished chances for a Transrapid line in Germany

The court in the north-western city of Osnabrueck near where the accident occurred on Sept. 22, 2006, found the men guilty of causing death and injury through negligence.

The high-speed Transrapid crashed into a 50-ton maintenance vehicle on the test track near Lathen in the Emsland region close to the Dutch border. Eleven people were injured.

It was traveling at 170 kilometers (105 miles) an hour and came to a halt after 500 meters with wreckage dangling over the sides of the elevated track.

Worst disaster in a decade

The driver was among those killed in the crash. It was Germany's worst rail disaster since 1998, when 101 people died when an express derailed and smashed into a bridge near the northern town of Eschede.

The two defendants were accused of failing to set out procedures for the use of a blocking system to prevent a train from entering a section of track when there is another vehicle on it.

An electronic blocking system was available at the test track, but was not activated at the time of the accident, according to experts.

No future in Germany

The maglev train was manufactured by Transrapid International, a joint company of Siemens and ThyssenKrupp, which was disbanded earlier this year.

The only Transrapid in commercial service operates in China between downtown Shanghai and the city's airport. The German city of Munich considered a similar link, but the project was dropped because of the cost.

Magnetic-levitation systems use high-power magnets to glide the trains along the tracks without friction at speeds of up to 450 kilometers per hour.

Siemens and ThyssenKrupp are to dissolve their partnership in the Transrapid International company making the high-speed magnetic levitation train, the two companies announced. (09.05.2008)

Two German engineers went on trial Tuesday, May 6, accused of negligence in the deadly crash of a high-speed magnetic levitation train that killed 23 people. (06.05.2008)

Germany's ThyssenKrupp is considering selling its Transrapid high-speed maglev technology to China after a planned track in Munich was unexpectedly scrapped due to spiraling costs, sparking heated debate in the country. (28.03.2008)