Siemens and ThyssenKrupp are to dissolve their partnership in the Transrapid International company making the high-speed magnetic levitation train, the two companies announced. 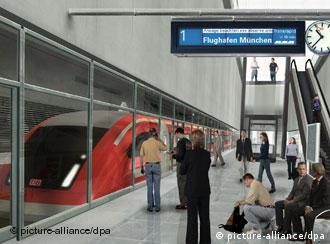 Despite big plans, the maglev train idea has not been met with commercial success

The decision on Thursday, May 8, came after the city of Munich decided in March to abandon plans for a 37-kilometer (23-mile) line linking the city center with the airport.

Despite the dissolution of the company, "the core competencies of the Transrapid technology" would remain in the possession of Siemens and ThyssenKrupp, they said.

The companies said they remained dedicated to promoting the system and were continuing talks with possible customers in China and the United States.

In announcing their decision after a board meeting in Erlangen in the southern state of Bavaria, electrical engineering concern Siemens and steelmaker ThyssenKrupp said Transrapid's main office in Berlin would close on Oct. 1.

Employees seconded to Transrapid would return to the parent companies, they said.

The only Transrapid in commercial service operates in China along a 30-kilometer (19-mile) route between downtown Shanghai and the city's airport.

There is also a test track at Lathen in the Emsland region of northern Germany, where 23 people were killed in a September 2006 accident.

Magnetic-levitation systems use powerful magnets to glide the trains along a monorail without friction at speeds of up to 500 kilometers per hour.

Although the technology was first patented in the 1930s and serious attempts to realize its potential began four decades ago, the maglev train idea has to date failed to find a significant market.

Germany's ThyssenKrupp is considering selling its Transrapid high-speed maglev technology to China after a planned track in Munich was unexpectedly scrapped due to spiraling costs, sparking heated debate in the country. (28.03.2008)