Germany's constitutional court ruled that a highly controversial privacy law should be overturned. Even before the verdict, the case made history: a record number of plaintiffs filed a lawsuit against the existing law. 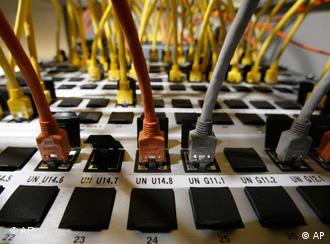 Germany's Federal Constitutional Court ruled Tuesday that a privacy law concerning the mass storage of telephone and Internet communication data was unconstitutional and should be thrown out.

According to the court, the provisions of the law in its current form were too vague. However, the decision did not go so far as to rule out the storage of data outright.

The highly controversial law, in place since 2008, required telecom companies to store data from telephone, mobile and e-mail communication, as well as Internet surfing sessoins, for up to half a year. That backlog of data must now be deleted, and no further data stored.

Around 35,000 people opposed the law in Germany's largest class action suit, among them lawyers, doctors, journalists and politicians from the Green Party the Free Democratic Party (FDP).

Claudia Roth, chairwoman of the Green party, called the ruling a “slap in the face of legislators” who had been trying to walk all over the constitution.

Before the ruling, Burkhard Hirsch, a member of the FDP, said the state had been “treating citizens as potential offenders." 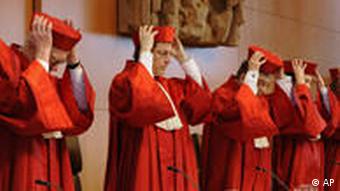 The court ruled that the current law was 'too vague'

“I though the law was correct,” said Peter Altmaier, a Christian Democratic Union (CDU) caucus leader, following the ruling in Berlin. “I will respect the decision. But I am not happy, that [the court] struck down the law.”

He said without the data, the gathering of intelligence will now be much more difficult, though he didn’t expect German security to suffer.

Wolfgang Bosbach, the CDU chairman of the federal internal affairs committee, warned earlier of the adverse consequences of the court’s decision for the fight against terrorism.

"Supporters of terrorism are stealthy and highly communicative, and we need access to this data," he told the daily Bild newspaper on Tuesday.

Bosbach said such data is crucial to preventing terror attacks like those in Madrid and London in 2004 and 2005. "There are no fingerprints, no traces of DNA [online]. If we don't have this data, then many of these offenses will go undetected."

Opinion: The state wants to fight terrorism with too much control

The German court's ruling overturning a law that lets anti-terror authorities save data on telephone calls and e-mails is only partly a victory for data protection advocates, says Deutsche Welle's Marcel Fuerstenau. (02.03.2010)

Germany's constitutional court is set to reassess the legality of data surveillance and storage. Rights activists and police are at loggerheads over conflicting priorities. (14.12.2009)