The 96-year-old woman, who was "on the run" for several hours last week, has been released. She was charged with complicity in the murder of more than 11,000 people. 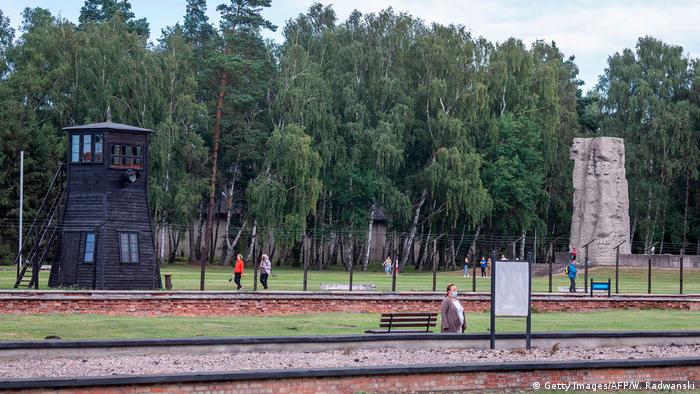 Roughly 65,000 people died at the Stutthof camp near Gdansk

A German district court on Tuesday released a former secretary at a Nazi death camp from custody ahead of her next hearing.

The woman, 96, was detained on Thursday after a dramatic escape attempt before her trial.

"The court has suspended the arrest warrant and released the accused from custody under the condition of precautionary measures," said Frederike Milhoffer from the court in the northern town of Itzehoe, without providing more details.

The next court session is scheduled for October 19, when the indictment is due to be read. That couldn't be done last week in the defendant's absence.

On Thursday, Irmgard F.* left the elderly care home she is living in by taxi and went to an underground station, a spokeswoman for the Itzehoe district court said.

Her whereabouts were unknown for several hours.

Police eventually arrested her after a warrant was issued for her to be brought before the regional court in Itzehoe.

A court spokeswoman said the defendant had previously "announced that she didn't want to come" to court, but that did not provide sufficient grounds for detaining her ahead of the trial. Given her age and health condition, she had not been expected "actively to evade the trial."

Accused in German concentration camp trial 'on the run'

Prosecutors say Irmgard F. worked as a secretary at the Stutthof concentration camp from 1943 to 1945.

She has been charged with complicity in the murder of more than 11,000 people, and attempted murder in several more cases.

Her trial is due to take place in a juvenile court, as the woman was aged just 18 and 19 at the time of the alleged crimes.

Some 65,000 people, many of them Jews, were killed at the Stutthof camp. Many prisoners died of starvation and illness, but the camp was also equipped with gas chambers and other means of killing.

*Editor's note: DW follows the German press code, which stresses the importance of protecting the privacy of suspected criminals or victims, and urges media outlets to refrain from revealing full names.