The German government set out Friday a series of goals to strengthen the country's economic upswing as Chancellor Angela Merkel's coalition approached the half-way point of its current term. 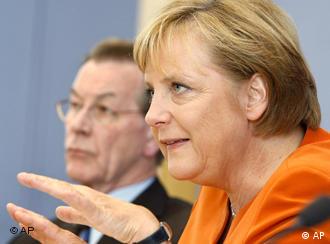 The measures include setting new targets to reduce greenhouse gas emissions and allowing more foreign experts into the country to combat a mounting skills shortage, Merkel told a news conference in Berlin.

"We don't want anyone to be left behind," the chancellor said at the end of a two-day cabinet meeting held at the government guest house in Meseberg, 70 kilometers north of the capital.

A document released after the meeting listed five key areas in which the government hoped to chart the course until the next general election set for September 2009.

Under the heading "Upswing, Participation, Prosperity," the paper also outlined measures to create more jobs, draw up measures aimed at heading off moves by wealthy foreign-owned state funds to build up unwanted stakes in the nation's key industries and protect sensitive sectors of German industry from unwelcome takeovers. 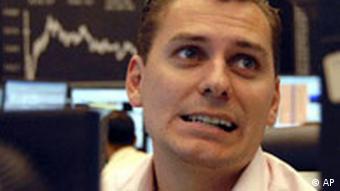 Germany wants to avoid angst like that over the credit crunch

At the same time, Merkel's coalition seized on the recent turmoil in global financial markets to again press the case for new steps to ensure greater transparency in the international hedge-fund sector.

The decision by the German government to again raise the need for improved self-regulation of hedge funds through a new code of conduct comes despite the reluctance of both Britain and the US, where the largest numbers of hedge funds are located, to take action to monitor the $1.4-trillion business.

However, Germany has singled out beefing up the supervision of hedge funds as part of its Group of Eight presidency agenda, which runs until the end of the year.

A paper drawn up for the Meseberg conclave stresses that Germany's national security interests have to be protected. But the government is also keen to ensure that Europe's biggest economy remains open and attractive to foreign investors. 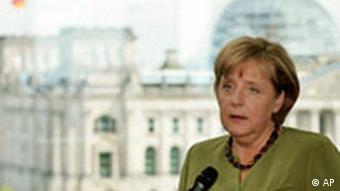 "It is a completely normal policy," Merkel told reporters in the capital, as she explained about the proposals to create control mechanisms for foreign funds, pre-empting complaints that the government is pursuing a policy of protectionism. Merkel said the move was not isolationist in its tack, noting that both the United States and France also use similar means.

The government also agreed on a package of 30 energy-saving measures in Merkel’s drive to battle climate change.

Germany wants to set the tone for the global climate debate ahead of a critical negotiation process that is to take place at the UN level in Bali in December but the full implementation of the package is expected to take up to a year as national laws will have to be changed to accommodate the new rules.

The bulk of additional savings -- which will help reduce emissions of climate-changing carbon dioxide (CO2) from fossil-fuel burning -- will have to be made in public and private buildings, in transport and by households. 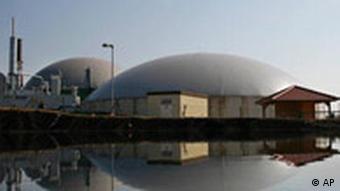 Germany hopes to rely more on its bio-reactors

Environment Minister Sigmar Gabriel called the agreement a "quantum leap" which would help reduce CO2 emissions by 36 percent by 2020 compared to 1990 levels and added that further measures could bring that figure to the minister’s own target of 40 percent.

Gabriel assured those who are suspicious of the costs and the effect on the labor market -- like Economy Minister Michael Glos -- that savings from the program would be twice the sum of the initial extra costs and that contrary to its image, climate protection did not destroy jobs, but had already created 200,000 of them.

The government will hike annual climate-protection budgets to 2.6 billion euros ($3.52 billion) compared with 800 million in 2005 to pay for the plan. To achieve this, it aims to draw on tax revenues and money from the sale of carbon pollution rights. It will also enlist Germany's individual states and municipalities to contribute.

The package also included plans to increase the share of renewable power in Germany’s power mix to nearly 30 percent up from the current level of 12 percent, and in heating to 14 percent by boosting the use of biogas fed into pipelines.

Green groups and the political opposition on the left, however, have already said the deal does not go far enough.

As the US Federal Reserve soothed jittery global markets by lowering a key interest rate, German Finance Minister Steinbrück said on Friday his government was actively involved in attempts to calm the financial markets. (17.08.2007)

German Chancellor Merkel has said Germany is considering introducing measures to limit how far foreign state-controlled funds can invest in its domestic companies. (19.07.2007)