Police in the German city of Bremen say they are continuing with heightened security measures amid a terrorism alert. A police union has warned of a concrete Islamist terror threat in Germany. 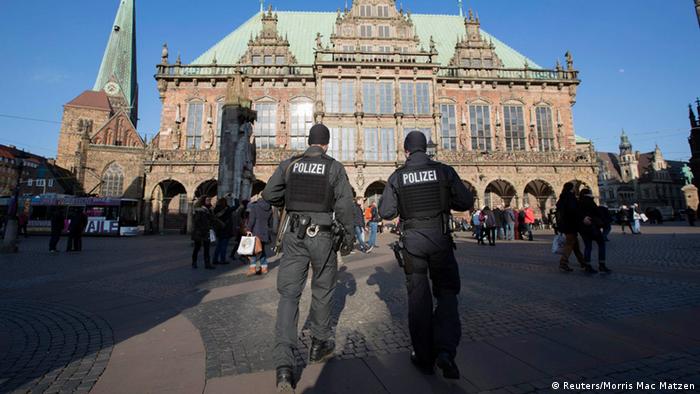 Police in the northern port city said on Sunday that they were continuing with security operations after receiving information about a potential Islamist terror threat on Friday evening.

"We have laid a security net over Bremen," police spokeswoman Franka Haedke said.

She confirmed that one person had been arrested and several were being temporarily held in custody in connection with the threat.

Police are standing guard at places of special significance, including the town hall, a main church and a synagogue, for a second day.

No precise details of the threat have been made public.

A Bundesliga football match between home team Werder Bremen and Wolfsburg scheduled for Sunday afternoon at the city's Weserstadion ground is to take place under tight security.

Bremen is seen as a major center for radical Islamists in Germany. Security authorities believe at least 16 Islamists from the city have traveled to Syria to fight along jihadist groups.

Four are thought to have returned, while two others have apparently died in fighting.

In December, an Islamic association called the "Culture and Family Association," which was suspected of recruiting young people for such causes, was banned by authorities in the city.

The German police union GdP has called on politicians to take the threat of terrorism in Germany seriously.

"Politicans should stop speaking of an abstract terror threat in Germany. Germany is definitely in the terrorists' sights. The terror warnings are becoming more frequent and more specific," GdP chairman Oliver Malchow said in a statement.

Germany has experienced two other terror alerts since the beginning of the year.

Threats of possible Islamist attacks led to the cancelation of a march by the anti-immigration group PEGIDA in the eastern city of Dresden in January, while a planned Carnival parade in Braunschweig in the north was called off in February.