German chipmaker Infineon to buy US rival Cypress for €9 billion

Infineon, Germany's largest chip manufacturer, is on the verge of making its biggest-ever acquisition. The move comes amid a slump in the chip industry and a dip in the chipmaker's share price. 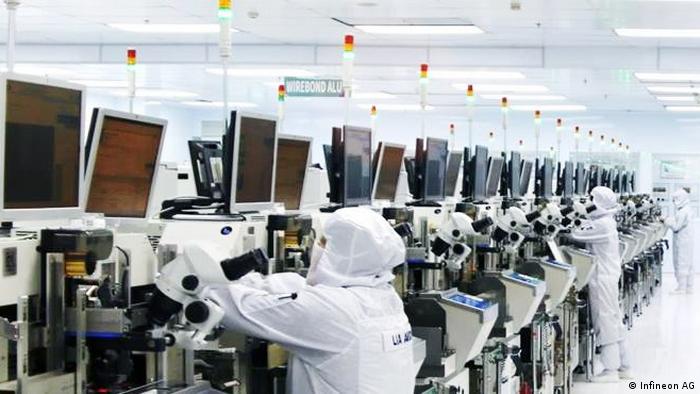 Infineon said it would pay $23.85 (€21.35) per share, a 46% premium on Cypress' average share price between mid-April and the end of May. That amounts to a €9 billion enterprise value, by far the most significant acquisition in the Bavarian firm's 20-year history.

The Bavarian company said that the deal still needs approval from Cypress shareholders. It aims to close the deal by the beginning of 2020.

"With this transaction, we will be able to offer our customers the most comprehensive portfolio for linking the real with the digital world," Infineon chief executive Reinhard Ploss said in a statement.

"This will open up additional growth potential in the automotive, industrial and Internet of Things sectors."

Infineon said a consortium of banks will underwrite the funding of the acquisition. The Munich-based firm also intends to finance around 30% of the transaction with new equity capital, use some cash reserves and finance the rest with debt.

Infineon, which was spun off from Germany's Siemens conglomerate in 1999, focuses on power semiconductors, sensors and security solutions.  California-based Cypress, which acquired the Internet of Things division of Qualcomm in 2016, focuses on microcontrollers, software and connectivity components, and flash memory.

"Combining these technology assets will enable comprehensive advanced solutions for high-growth applications such as electric devices, battery-powered devices and power supplies," they said in a joint statement.

With around 6,500 employees, Cypress is significantly smaller than Infineon, which has more than 40,000 employees worldwide. The acquisition is the first major takeover by Infineon since the Munich-based company acquired International Rectifier in 2015.

Infineon's share price fell by 5% when markets in Frankfurt opened on Monday, putting it at the bottom of the STOXX 600. The company's shares have lost almost a third of their value over the past year.

The chipmaker's dip in share price is part of an overall slump in the chip industry amid global economic uncertainty and a dip in the Chinese car market. Market researchers at London-based firm IHS Markit expect industry revenue to dip by 7% worldwide to $446 billion.

The company's CEO Ploss has already twice lowered its forecast for the fiscal year. After announcing a target in sales growth of 11% last fall, he lowered that forecast to 9% in February and again to 5% in March.

Spectrum: The fascinating world of science and technology

From advances that will change our lives to offbeat oddities, Spectrum keeps you abreast of developments in the realm of European science and technology news. (11.07.2016)

Digital colonialism: cheap internet access for Africa, but at what cost?

The African continent is developing its digital infrastructure with the support of know-how and technology from Silicon Valley. But is it giving the tech giants too much power? (29.05.2019)