The German military is preparing to send more troops to support NATO member state Turkey, bordering Syria. But it is unclear exactly how many soldiers might have to join the mission. 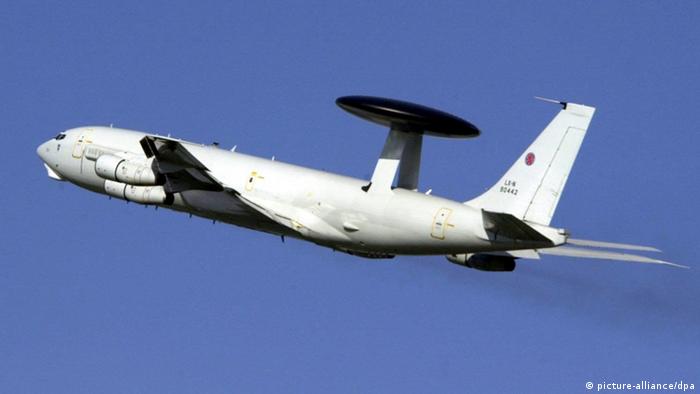 Germany's Ministry of Foreign Affairs and Ministry of Defense informed the lower house of parliament, the Bundestag, that several of NATO's Airborne Early Warning and Control planes (AWACS) would temporarily be moved from Germany to the central Turkish city of Konya.

The decision came after Turkey in November shot down a Russian jet fighter allegedly entering its air space while on a combat mission to neighboring Syria; the deployment of NATO's AWACS planes is intended to stabilize the air space over Turkey and to avoid further shoot-downs of planes, as the diplomatic spat between the two nations that ensued threatened regional stability.

No need to go through parliament

The memo also pointed out that the Bundestag was not required to sign off the operation as this was not part of a combat mission. It specified that the self-declared "Islamic State" (IS) did not have any known air defenses of its own and that there were no indications that other parties involved in the conflict, such as Syria and Russia, would use their air force against NATO member Turkey. Some German parliamentarians have, however, demanded further explanations for the motivation behind the move.

The multinational crew aboard an AWACS plane is normally made up of 16 military personnel. With Germany providing roughly a third of the service members involved in the mission, the final number of Germans affected will depend on the number of planes agreed to be sent to the region.

A spokesman for Germany's Ministry of Defense said that NATO was still in the "operational planning stages" and did not have any such details to divulge. The NATO plan also involves the strengthening of maritime defenses, which are also to be supplied by Germany as well as Denmark.

Following a French request for Germany to join the international coalition against IS, the Bundestag agreed in early December 2015 to send fighter jets for reconnaissance flights to the region. The plea came after the November 13 attack in Paris, which killed 130 people. IS claimed responsibility for the massacre. About 1,200 soldiers will be part of that mission.

In the same month, Germany also extended its training and assistance mission in Afghanistan as part of NATO's Mission Resolute Support, in addition to joining NATO's Operation Active Endavour again, which is designed to keep Mediterranean waters safe from terrorist groups.

The "Islamic State" (IS) has lost 14 percent of the territory it held at the start of the year, suggesting the group may have overstretched. The Syrian Kurds have increased territory under their control by 186 percent. (22.12.2015)