Max Beckmann's 1942 painting "The Egyptian" reached a record German price at auction of €4.7 million ($5.5 million) in Berlin. Five hundred of his paintings were confiscated from museums in the 1930s. 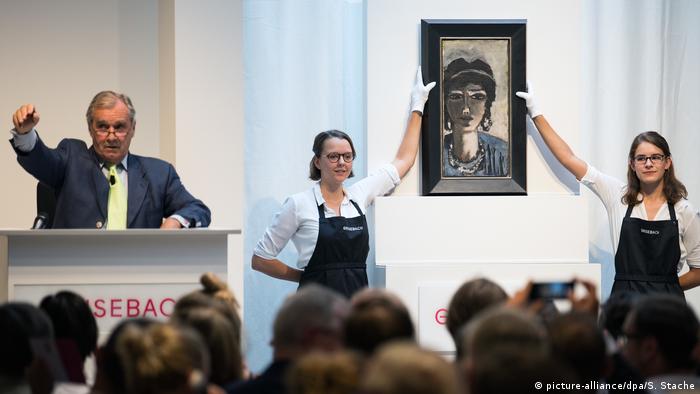 Max Beckmann's "Woman's head in Blue and Gray (The Egyptian)" was sold on Thursday by the Villa Grisebach auction house in Berlin to an anonymous buyer. It had been estimated for the auction at €2 million before reaching its record €4.7 million.

Auctioneer Peter Graf zu Eltz said it was the highest amount ever raised at an art auction in Germany. Beckmann's painting "Anni" was auctioned in 2005 for €3.4 million. 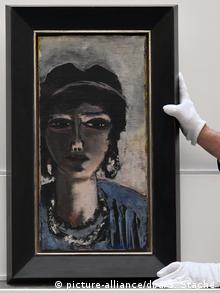 Painted while Beckmann was living in Holland, "The Egyptian" was acquired in Amsterdam by Beckmann's patron Eberhard Göpel, whose wife, Barbara, had compiled a catalogue of the artist's works. "The Egyptian" came to auction in Berlin from her estate.

Beckmann first called the painting "Woman's head in blue and gray" before changing it to "The Egyptian." It has been displayed in a number of museums around the world.

The woman in question may have been Nimet Eloui Bey, who was also painted by surrealists in Paris. She is believed to have been a close friend of Man Ray and Lee Miller.

Beckmann has come to be recognized as one of the major European painters of the twentieth century, within mainstream modernism alongside Italian artist Giorgio de Chirico and Irish-British painter Francis Bacon. Born in Leipzig in 1884, he studied at the Weimar academy before going to Paris in 1903. When he returned to Germany he was hailed as a "German Delacroix" because of his style.

He served as a medical orderly for a year during World War One and was discharged because of ill health. He moved to Frankfurt in 1915 and produced some of the key works of his career - in a much-changed style, due to his bitter experiences during the war.

Beckmann went on to join artists George Grosz and Otto Dix in the "New Objectivity" exhibition at Mannheim in 1925 which saw the start of the new realism movement which dominated German art and literature between the wars. He taught in Frankfurt and enjoyed considerable success during the Weimar Republic. 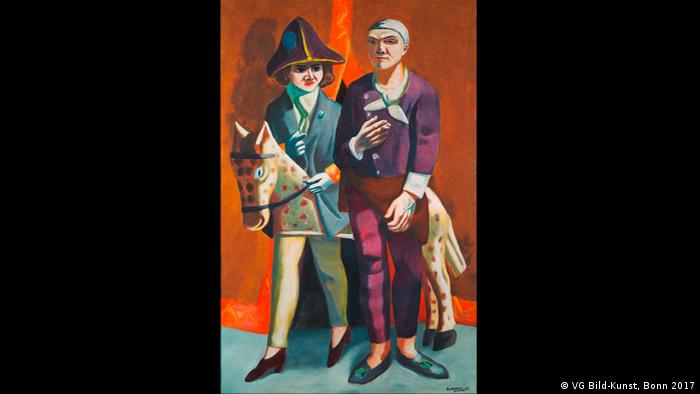 Declared a "cultural Bolshevik" in 1933 by the Nazi regime, he lost his job in Frankfurt and more than 500 of his works were confiscated from German museums. In 1937, he left for the Netherlands. After the war, he went to the United States where he taught in St Louis and in New York.

In 1947, three years before his death, he wrote in his diary: "Strange, that in every city I always hear the lions roar!"

Beckmann had a one-man show at the Venice Biennale of 1950, the year he died, aged 66 from a heart attack in New York.

A painting by Italian artist Amedeo Modigliani has become the most valuable work ever sold at Sotheby's. Sales have spiked in recent months as private buyers and new galleries enhance their collections. (15.05.2018)

The personal art collection of David Rockefeller and his wife, Peggy, has gone under the hammer at Christie's. Just one day in, the auction has already broken the record as the most expensive private collection. (09.05.2018)