German Ambassador Daniel Kriener has been told to leave Venezuela within 48 hours. He has been accused by the Maduro government of meddling in Venezuela's internal affairs. 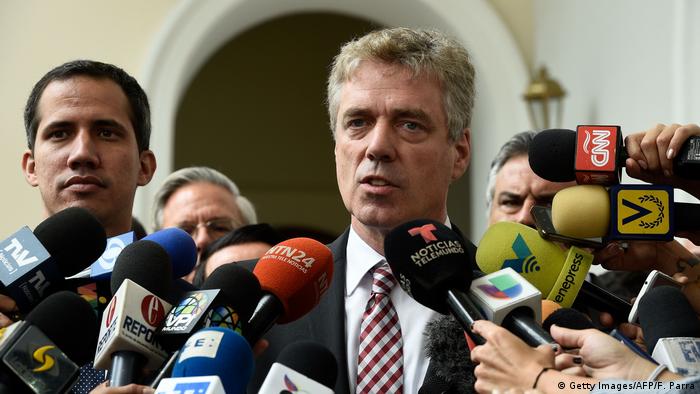 A statement from Venezuela's Foreign Ministry on Wednesday said German Ambassador Daniel Kriener had repeatedly "interfered in the country's internal affairs, in clear contravention of the norms that govern diplomatic relations."

The government of acting President Nicolas Maduro said he had 48 hours to leave Venezuela.

Kriener, who assumed the post only last year, was among a group of Western diplomats who greeted self-proclaimed interim President Juan Guaido at the Caracas airport on Monday. Guaido had just returned from a 10-day tour of South American allies, defying a government-issued ban on him leaving the country. He described the expulsion as a "threat against Germany" in an interview with German news magazine Spiegel.

The Foreign Ministry statement added that Venezuela would not accept a foreign diplomat acting "in clear alignment with the conspiracy agenda of extremist sectors of the Venezuelan opposition."

The German Foreign Office confirmed the diplomat's expulsion: "Daniel Kriener has been declared a persona non grata. We are currently coordinating our next steps, also with our partners on the ground," a spokesperson said.

"This is an incomprehensible decision that aggravates the situation and does not contribute to de-escalation," Maas said in a statement. "Our, Europe's, support for Juan Guaido is unbroken. Ambassador Kriener is doing excellent work in Caracas, including in recent days."

The German Embassy said on its Twitter account on Monday that Kriener hoped Guaido's return "was a step towards a peaceful and political process to overcome the Venezuelan crisis."

A growing number of Venezuelans are suffering from malnutrition after years of food and medicine shortages under Maduro. The political and economic crisis has led some 2.7 million people to flee the country since 2015, according to the UN.

Guaido last month attempted to bring shipments of humanitarian aid across the borders of Brazil and Colombia, but the trucks were blocked by the Venezuelan army. Maduro says he is the target of a foreign-backed coup plot.

The Venezuelan government questioned Cody Weddle for a segment about disatisfied military officers that aired last month. A Caracas-based NGO said 49 journalist detentions have taken place in the country this year. (07.03.2019)